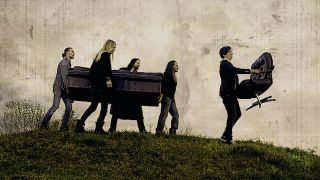 It’s New Year’s Eve 2013 and Daniel Gildenlöw is enjoying dinner with his family and bandmates. He makes a toast, addressing the misfortunes of the year just gone and looking forward to a fruitful 2014. A few days later he’s lying in hospital with a vacuum pump attached to his back, several kilos lighter, battling the flesh-eating disease necrotising fasciitis that is attacking his body. He goes through a series of operations under general anaesthetic that treat the vast amounts of flesh ravaged by the affliction, he’s told that he needs to starve himself on alternate days in preparation for the upcoming operations and he’s delirious with painkillers.

Simple things, like rolling over in bed or going to the toilet, become painful and debilitating tasks. To top it all off, he has to miss the band’s US tour with Transatlantic and it’s looking likely that he won’t be heading to the Bahamas for Progressive Nation At Sea. Suddenly, 2013 didn’t seem that bad after all.

“In the midst of it, it was surreal, and even now, months later, small things can bring that feeling back,” says Gildenlöw, matter-of-factly but with a glimmer of pain at the memory.

Given the gory details of the Pain Of Salvation frontman’s illness, it’s probably not the easiest thing to discuss over the phone to a journalist he’s never met. And yet Gildenlöw speaks to Prog with remarkable openness, articulating his experience with wisdom and spirit after less than a year of being subjected to this rare and often fatal disease that affects deep tissue and spreads rapidly as the infection chomps its victim. For the afflicted, it’s an agonising ordeal that demands quick treatment.

Gildenlöw spent almost half the year in hospital. Even though the surgery to clear the infected area, which affected a large area of his back, took a matter of weeks, the recovery period spread into months.

“In the beginning it was easier to deal with it, partly because you were simply trying to grasp what the hell was happening,” he says. “Once the surgery to remove the infection was done there was no risk for my life other than someone possibly doing something wrong while they put me under for these wound care sessions. But from a physical point of view, the hardest part was being anaesthetised every second day. I’d have to be on starvation for those days and there were a lot of operations. That was pretty bad.

“When they closed the last wound with plastic surgery, from that point on it was just boredom. The hard part was lying there healing and realising what bad shape I was in. When everything was done I just waited and I’d get another infection, and because of the previous weeks and months, I was already so drained mentally and physically.”

The days and months that Gildenlöw spent recovering from the infection were compounded by the fact that he was missing out on gigs with Transatlantic as their fifth touring member, culminating with an appearance on the Progressive Nation At Sea cruise both with Transatlantic and his full-time band Pain Of Salvation. With the tour beginning just weeks after his hospitalisation, there wasn’t a hope in hell that Gildenlöw would be able to join the band in the US, much to his deep frustration and disappointment.

“Towards the end of my treatment I felt like I was losing my energy,” he recalls. “It was heavy and I had my moments where it was really dark. Most of the time I was just trying to keep my mood up as much as possible by joking about things and that’s when I made the series of guitar pictures where the guitar was the patient at the hospital. But towards the end I couldn’t keep up that energy any more.

“It coincided with the fact that at that time I decided I didn’t want to be on painkillers any more so I stopped them, which was a bad idea. I had such physical withdrawal symptoms that I couldn’t even stand up and I couldn’t lie in the bed either. It was so painful and I had tons of sweat and my mood was going all over the place. I felt totally sad beyond belief.”

He continues, with renewed warmth: “I said at one point that I wasn’t at my best and the surgeon said, ‘Are you kidding me? You’ve been a great patient. I wouldn’t last two weeks without starting to yell at people.’”

This is precisely why Prog is keen to talk to Gildenlöw about his experience and why he is brave enough to retread those painful steps. For those familiar with Pain Of Salvation and have seen them live or read interviews with the frontman, you’ll have grasped his charisma, his zest for life and his inspiring self-awareness. It speaks volumes that this multi-instrumentalist with a five-octave vocal range has been involved in myriad prog projects, from The Flower Kings (where he contributed vocals, keys, guitars and percussion), Arjen Lucassen’s Ayreon and a spoken word inclusion on Dream Theater’s Systematic Chaos, not to mention being at the helm of nine finely crafted Pain Of Salvation albums. It all reveals a man with a phenomenal musical talent and a prolific, productive mentality that stares down even the slightest whiff of adversity and blows it to smithereens. If silver linings exist, Gildenlöw sees them.

“That was one of the good things about lying in a hospital bed for a long time,” he says as he begins to describe his epiphany. “It became very clear what I longed for and that was to get together with the guys and play and I longed for spending time with my family.”

But being bed-bound meant that the dream of playing Progressive Nation At Sea was just that – a distant abandoned hope, and a jolly in the Bahamas that would have to be put on hold. Except that it wasn’t – at least for the rest of his band.

“We decided that the band would do the Bahamas trip without me,” he says emphatically. “I realised that in the first time in the history of that band we had a line‑up strong enough to pull that off. You have Ragnar [Zolberg] in the band who is like a natural front guy, you have Daniel [Karlsson] and Léo [Margarit] who are both excellent singers, and we had Clay [Withrow] coming in to basically be the guitar tech and he already knew lots of the songs.”

Testament to his get-up-and-go mentality, Gildenlöw coached the band during their rehearsal. “I still had a vacuum pump attached inside the flesh of my back, I’d lost 10 or 12 kilos and I’d have to stop after five or six steps when I walked up the stairs to catch my breath, but still it was invigorating to be there. I felt comfortable in delegating and it felt thrilling and wonderfully positive in a way.”

Remarkably, as soon as he was well enough, the band took to the road and recorded a new album that has recently been released: Falling Home, an acoustic reworking of hand‑picked songs from their back catalogue and a couple of covers, including Dio’s Holy Diver and Lou Reed’s Perfect Day. “I’m just hoping that fans will be able to consider this a real album and not a filler acoustic album,” Gildenlöw admits.

Recorded with the sort of pared-down affection that a band has for their old material, Falling Home’s jazzy lilt is evident of their proggy fundamentals and, more importantly, is reassurance that there’s still a will to create and record.

In September 2014, Pain Of Salvation finally made it over to the US with a delighted Gildenlöw who got to tick something off his bucket list. “I always wanted to play a show in Vegas just for the sake of it,” he says. Which they did, with Ragnar dressed as a woman, Gildenlöw in a rabbit onesie and bassist Gustaf Hielm “dressed up as a pro-handgun redneck. He bought a hat that promoted the second amendment and had his pants pulled up over his belly button”. Gildenlöw pauses. “It’s not the Bahamas but I’ll settle for that.”

Further to that, and to the surprise of many Pain Of Salvation fans, Gildenlöw has also put himself forward for Melodifestivalen [The Melody Festival], an annual televised competition to determine who will represent Sweden in the Eurovision Song Contest.

“I like being in The Melody Festival because it’s fun,” he smiles, without a hint of defensiveness. “But I was asked if I have the winning song, and by default I’m meant to say yes. But not me, I’m saying no. I know my country and I know what’s going to win and I don’t have the winning song. So don’t expect me to represent Sweden in the Eurovision… but don’t tell Sweden that!”

With 2014 finally behind him, a year that has tested the Pain Of Salvation singer to his physical and mental limits, Daniel Gildenlöw looks to the future.

“I had my break. It was unnecessarily painful and long but I got it. And now I know that I want to do this because I missed it and I know the passion is still there.”

Falling Home is out now on InsideOut. For more information, see www.painofsalvation.com.