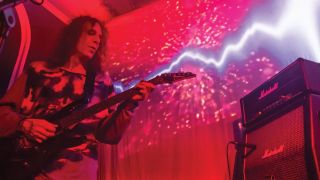 "It’s a light-hearted message about feeling all right," explains Ozrics mainman Ed Wynne. "It's not trying to dig down into the depths of what is going wrong in the world but giving people a little bit of relief from everyday life, a stepping-stone into the astral plane."

Space For Earth will be the band's first new album since 2015's Technicians Of The Sacred. The Ozric Tentacles back catalogue is currently undergoing a long-running remaster series on Kscope from the band, with seven classic Ozric Tentacles albums remastered by Ed Wynne scheduled for release this year.