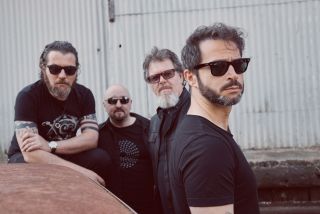 O.R.k., the international prog rock band have signed to Kscope and will release their new album, Ramagehead, in February. It sees the band working with System Of A Down singer Serj Tankian who features on the first single, Black Booms.

The band, who feature King Crimson drummer Pat Mastelotto, former Porcupine Tree bassist Colin Edwin, and Italian singer Esposito Fornasari and guitarist Carmelo Pipitone, have released a trailer for the new album, which you can watch below.

“Ramagehead is a not a concept album as such, but there is certainly an identifiable theme, in that we attempt to express the everyday bewilderment bought about by the uncertain times we are living in, and the constant confusing information overload that we are all subjected to in today's post-fact environment," Edwin explained to Prog. "We also wanted to harness the power, unpredictability and spontaneity of the O.R.k. live experience into a static recording whilst aiming for a high-resolution sonic space that can be revisited repeatedly by the avid listener to discover ever deeper layers.”

Ramagehead was recorded in Italy, USA and the UK and features cover art from Tool's Adam Jones.

The band will be touring Europe throughout February and March as support to new labelmates The Pineapple Thief. They will also play their own European dates at: