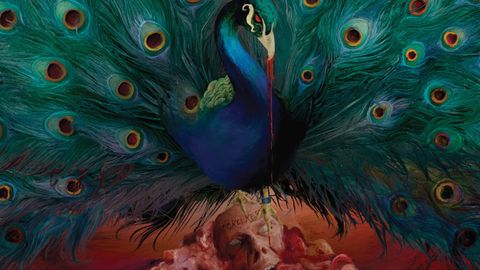 Times are tough for Opeth’s beleaguered metal fans. They were plunged into hair-pulling despair when the Swedes unleashed the kaleidoscopic Heritage in 2011, which stripped away the signature death vocals and the deafening distortion in favour of sprawling 70s prog licks. Pale Communion built on the experimentation three years later, dipping toes into fusion and country. And now, will the metalheads get their kicks again? Nope. But Opeth ringleader Mikael Åkerfeldt doesn’t give two hoots, and rightly so.

The band’s 12th album, Sorceress, recorded at Wales’ iconic Rockfield Studios, feels like a natural progression, adding more colours to their palette. In an odd dichotomy: it’s Opeth at their most infectious, but it still feels like a grower. Åkerfeldt’s vocals, although always like liquid velvet, are at their most grabbable. Meanwhile, the music flourishes, despite rarely overflowing with fretboard theatrics.

Will the metalheads get their kicks once again? Nope.

Opeth don’t shy away from bouts of downtime, and in Will O The Wisp, it’s almost as close to balladry as they’ve ever been. The self-professed ode to Jethro Tull threatens to feel a little corny, but some aching Damnation-esque leads pull things back. The Nick Drake-ish Sorceress 2, meanwhile, sees haunting falsetto vocals melt with a welcome, brooding Storm Corrosion ambience. There are still some rollicking riffs chucked in too. Chrysalis catapults with verve while the eight-minute Strange Brew – the proggiest number here – is a wild roller-coaster ride, and current-age Opeth at their best.

There’s a plethora of highlights on Sorceress, but only time will tell how highly it will rank in Opeth’s glittering canon. It’ll certainly be up there, though. Its last full track, Era, shakes hands with chord progressions and melodies rarely touched by the Swedes. It’s nearly happy, galloping with a curiously radio-friendly sheen, but the tune is too reliant on its rudimentary verse riff, becoming jaded as a result.

It’s a bit of a frustrating finale to an album that doesn’t see Opeth take too many great strides forward, but it’s one that should ensnare them even more fans – perhaps replacing all those forlorn metalheads lost somewhere in the ether.

The A-Z of Opeth