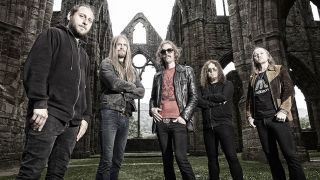 Their 12th studio album was released a year ago – and Akerfeld reports he’s already turning his attention to their next record and what it might sound like.

He tells eonmusic: “Sorceress for me is old hat – it’s a lovely record, but it’s back ‘there.’ I’m not lingering on it because it’s old now.

“I’m not lingering on this record as being a beacon of hope for anything – it’s just what we did then, and I’m hoping next time we’re going to do something different, and I hope, something twisted. Nothing necessarily great, but twisted at least.”

As for when their next studio album could arrive, Akerfeld replies: “Maybe the end of, or mid-2019, I’m thinking. I want to have a sabbatical, because we’ve been doing this for a long time, so I want to keep away and just be with my kids. Once I write songs, I want to sit and be.”

Opeth picked up the International Band Of The Year at last month’s Progressive Music Awards in London. They’ll return to the UK and Ireland for live dates in November. Find a full list below.