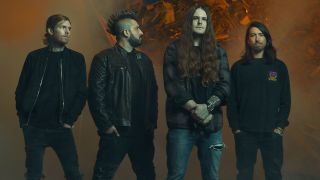 Of Mice & Men have released a video for their new single How To Survive.

The song first came to light last month, when it was revealed that the Californian outfit had been back in the studio with producer Josh Wilbur working on the follow-up to 2018’s Defy.

Now the band have teamed up with director Zev Deans to create the apocalyptic video for the song.

Vocalist and bassist Aaron Pauley says: “We're excited to debut our new video for How To Survive, which we worked on with director Zev Deans. Together, we were able to bring the visual and story elements of this song to fruition... and more is to come!”

A limited edition flexi disc of the single, complete with t-shirt and survival manual, is now available to pre-order.

Of Mice & Men have also announced a run of European headline shows which will take place throughout August between their previously announced festival appearances.

Pauley says: “We're so excited to be on the road playing our songs live for our fans all around the world. Having just recently completed our sixth album, we're ready to reconnect with our fans face to face and are ready to go places we've never been before, delivering our brand of rock and metal to the masses."

Tickets for the newly announced shows will go on general sale from 9am GMT on Friday (March 8).