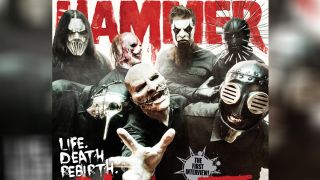 It's finally here – the new issue of Metal Hammer! It's packed with a metric fuck tonne of the best bands on the planet – starting with our cover stars SLIPKNOT! But what have we learned from the 262nd issue of Hammer?

SLIPKNOT ARE BACK MOTHERFUCKERS

No doubt you’ve seen the internet shitting itself over the weekend thanks to our mind-blowing new cover with the Iowan metal legends, Slipknot! That’s right, maggots – they’re baaaaaaack! And we’re so stoked to unveil the world’s first interview since their return. We’re granted exclusive access to shoot the band – seriously, you won’t find these photos anywhere else. And we talk exclusively to Corey Taylor to get the full story on what happened to the ‘Knot over the past four years and attempt to find out what happened with Joey, what’s going on with the new drummer and bassist, and what we can expect from the biggest metal release of 2014. You don’t want to miss this.

So you’re the guitarist in multi-million record selling heavy metal band that tours the world constantly and are already working on a new record. What the hell do you do with your downtime? Oh that’s right… you buy a monster truck and drive it like a madman over ramps and race against other insane dudes. How do we know that? Well Zoltan took us for a spin…

MUSIC COMES FROM WITHIN

Noisy post-hardcore mob Beartooth have been making waves on both sides of the Pond since dropping their emotionally-heavy debut, so we caught up with frontman and mastermind Caleb Shomo to find out where one of the most honest records of the year came from and why it’s such a cathartic release.

Yeah yeah, we know you’re sat there thinking – “But how is a rapper metal? Blah blah blah…” but the reality is Ice-T has fronted one of the most controversial and socially vital hardcore bands LA has to offer with Body Count. So we found out what music makes him tick – from Black Sabbath to Slayer (and a bit of Parliament thrown in for good measure).

ELECTRIC WIZARD ARE A CHEERFUL BUNCH

We get the lowdown on from the psychedelic doom-mongers on their mission to soundtrack the great apocalypse – which, if frontman Jus Osborn is to be believed, is coming much sooner than you think.

IN FLAMES ARE GAME-CHANGERS

Eleven studio albums, countless headline shows and a career spanning more than 20 years – it’s safe to say In Flames have had a significant influence on the metal world. But how did a group of guys from a tiny Swedish city manage to change the face of metal forever? We find out…

WE ARE ONE FAMILY

We sit down with Cynic’s openly gay frontman Paul Masvidal to talk about metal’s sometimes shitty attitude toward homosexuality and ask whether these feelings are finally changing for the better.

THERE’S SOME WEIRDOS OUT THERE

If you were at Bloodstock this year you no doubt saw thousands of devoted metalheads dancing like robots as five Midland monsters hammered through some overtly daft but technical brutality. Evil Scarecrow are their name and they’re here to drag you into their weird and wonderful world – complete with robots, aliens and Crabulon.

If you’re an avid Anthrax fan like us, you’ll know that Mr Scott Ian doesn’t mince his words. In the new issue we get his Gospel and find out exactly what he thinks about Gene Simmons, Megadeth, changing his name and internet haters to name a few.

Plus there’s LOADS more from Dez Fafara, Empress AD and 1349. Plus a free CD of breaking bangers (including Baby Godzilla and Collibus) and massive posters from Volbeat and Slayer.

Unfortunately we’ve now SOLD OUT IN OUR ONLINE STORE but you can still head down the shops and get a copy. If you pick it up in Morrisons you’ll receive a £1 discount! Sweet, huh?

PLEASE NOTE: If you’re a subscriber, your copy may arrive a day or two later than usual. Keep your eyes peeled on that letterbox!