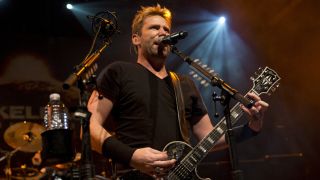 Nickelback have revealed their upcoming album is titled No Fixed Address because it was written in various locations across the world.

Frontman Chad Kroeger tells The Pulse Of Radio: “We did it all over the place. We were in Vancouver, we were in LA, we were Maui. We had a portable rig with us on European tour and we were recording stuff there. That’s why we’ve titled the album No Fixed Address.”

The vocalist previously stated the album featured some of their best work. He said: “We feel it’s some of our strongest material to date. During the recording process it became clear that the entire team had a shared vision and passion for this project.”

This week, he responded to negative tabloid rumours surrounding his marriage to Avril Lavigne, calling them “very amusing” but said speculation upsets his family.

The Canadian rockers launch their eighth album, the follow-up to 2011’s Here And Now, on November 17. They’ll then head out on a 60-date North American tour starting in February.