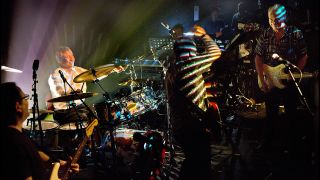 Nick Mason’s Saucerful Of Secrets have announced a North American tour for next year.

Mason is joined in the lineup by Gary Kemp, Guy Pratt, Lee Harris and Dom Beken, with the outfit playing a selection of early Pink Floyd material, including tracks from The Piper At The Gates Of Dawn and A Saucerful Of Secrets.

Last month the band revealed a run of UK shows for April and May – and they’ve now announced a total of 25 shows across the US and Canada which will take place before the UK dates.