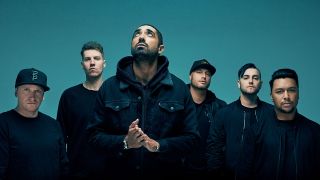 New Zealand prog rock sextet City Of Souls have premiered the video for their new single Ferryman with Prog. The song, which can be watched in full below, is taken from the band's forthcoming new debut album Synaesthesia, which the band have been working on with acclaimed Australian producer Forrester Savell, known for his work with COG, Karnivool, Dead Letter Circus, Animals As Leaders and more.

"We wanted this record to sound big, a wide sonic footprint and Fozz's (Forrester Savell) work has that size and space we were after," vocalist Richie Simpson told Prog. "With a lot out there in terms of heavier music following a similar footprint of programmed drums, auto-tuned vocals and perpetually shifting riffs, we wanted to solidify and simplify our sound. We wanted good honest songs - and Ferryman is THE track to get this beast rolling.”

City Of Souls own stock has been fast rising. At the beginning of the year we premiered the band's video for Wolf, whilst shows alongside Stone Sour and Bring Me The Horizon has seen their profile lifted, and they will be heading out in December on a summer NZ tour, to be announced very soon!

Ferryman can be ordered here.