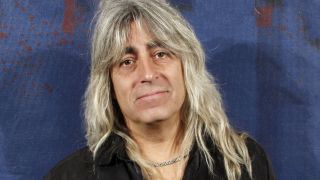 The surviving members of Motorhead will gather to stage a memorial for Lemmy – but only when the time is right, says drummer Mikkey Dee.

The band came to an end with the icon’s death in December, aged 70, after being diagnosed with an aggressive form of cancer just two days previously. The rock world has continued paying tribute, with Alice Cooper’s Hollywood Vampires performing Ace Of Spades at the Grammys earlier this week.

Dee tells Sweden Rock Magazine: “Something like that is definitely happening, but when and how I have no idea.

“Now is not the right time. I’d like to wait until there’s a demand. The fans have been eating hamburgers for 40 years, so maybe you don’t want to have hamburger the first year after Lemmy’s death – instead you have to crave that hamburger again.

“We’ve toured for so many years that some time has to pass until people say, ‘Fuck, I’d really like to hear some cool Motorhead songs live on stage again.’”

He believes that all-star tribute band Dio Disciples toured too soon after the death of Ronnie James Dio in 2010, and doesn’t want to make the same mistake. “It wasn’t at all appropriate for several reasons,” he says.

“I want there to be a demand for Motorhead first, then maybe something will happen with me and Phil Campbell and maybe Fast Eddie Clarke plus two or three other megastars that love Motorhead. You can do something really great with it – but it’s all about the right place at the right time.”

Dee says Lemmy’s death only really hit him at the funeral last month, when he saw the bandleader’s boots on display. “He was wearing them all the time. He didn’t feel comfortable if he wasn’t wearing his boots. And there they were, empty. Then it all hit me. That was really hard to look at.”

The drummer will take part in Thin Lizzy’s next run of shows, including an appearance at the Ramblin’ Man Fair in Kent in July.

Speaking at the Grammys after the Hollywood Vampires’ tribute, Inder said: “He was determined all the way to the end. That’s all he lived for. He wanted to go with his boots on, and he kind of did.

“He set a great example for hard-working musicians. Anyone who gains respect from sheer hard work, never stopping, never giving up, never giving in – he represented that.”

Lemmy is the cover star of the current editions of Classic Rock and Metal Hammer, both available in print, online and via TeamRock+.