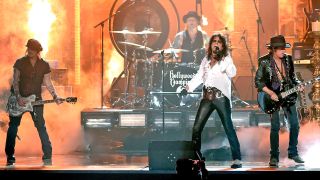 Ghost were named winners of the Best Metal Performance Award for Cirice, while Muse won Best Rock Album for Drones.

Dave Grohl introduced the Hollywood Vampires’ TV debut by saying: “Many of us play rock’n’roll but a rare few among us are rock’n’roll. Lemmy was rock’n’roll. He was a rebel, an outsider, one of a kind, and a way of life. He was Motorhead. He was a legend and I was proud to call him my friend.”

Cooper, Joe Perry, Johnny Depp, Matt Sorum and Duff McKagan then hit the stage, performing Ace Of Spades in front of a bass rig featuring Lemmy’s trademark high mic stand, cowboy hat and bass. They appeared to have won over much of the bemused audience by the end of their short set.

Alabama Shakes bandleader Brittany Howard admitted it had been a “crazy” night for her, adding: “What an honour. We never even dreamed of this moment. When we started this we were in high school and we just did it for fun. We never thought we’d win any recognition like this. It’s beautiful – and I promise we’re going to keep going.”

Ghost frontman Papa Emeritus said in his brief acceptance speech: “Thank you so much for this. This is a big, big thing for us, obviously. A nightmare has just turned into a dream – thank you all for that.”

Maria Schneider’s work on David Bowie’s Sue (Or In A Season Of Crime) won Best Arrangement while Grammys were also received by Bob Dylan and Mavis Staples.