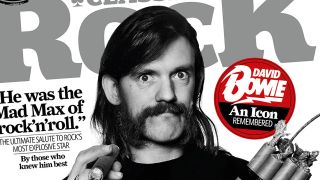 This month’s issue features an epic 17-page celebration of the life and times of the greatest rock’n’roller of them all, by the people who knew him best. Including…

The Icon: GN’R’s Duff McKagan on why Lemmy embodied a lifestyle.

The Bandmate: Hawkwind’s Dave Brock recalls the birth of the legend.

The Friend: Nigel Mogg looks back on drunken nights in London and LA.

**Nils Lofgren
**He’s been Bruce Springsteen’s sidekick, Neil Young’s confidante and Ringo’s right-hand man. His name is Nils Lofgren and he’s coming to a trampoline near you…

1966 – The Year That Built Rock
50 years on, we look back at 12 momentous months that gave birth to rock as we know it, from The Beatles to Bob Dylan, The Yardbirds to Zappa.

The Birth Of Blues Rock
How a new wave of guitar giants transformed the blues into a new strand of British rock music.

The Who
Three years before Tommy, Pete Townshend wrote his first rock ‘opera’. And it was all thanks to the bloke behind Oliver!

The 66 Most Influential Records Of 1966
Pet Sounds, Aftermath, the Beano Album and more – these are the albums and singles that shaped everything.

Before They Were Famous
From the Manish Boys to Episode Six, these are the bands which spawned the superstars of the 1970s.

What’s on the Free CD

**Stone Deaf Forever
**Blow your mind and other organs with 15 songs from the world’s greatest, dirtiest new rock’n’roll bands – all born to raise hell. Including Thunderchief, Savage Hearts, Free Recovery, Snakewine and more…

Raw Power
Clap your ears around the Rockster XS, a portable and powerful solution to playing your music outdoors.

The Stories Behind The Songs: The Damned
Stand back! Recoil in terror! It’s New Rose – the original punk rock single.

Q&A: Dave Mustaine
We finally get around to asking the Megadeth mainman the key question: is he a dick, or just misunderstood?

Live Previews
Must-see gigs from The Winery Dogs, Whiskey Myers and Kula Shaker. Plus full gig listings – find out who’s playing where and when.

Heavy Load: Rick Springfield
The Jessie’s Girl geezer on fake Egyptian artefacts and how he just might have replaced Roger Moore as the new Bond.

Read Classic Rock magazine the way you want: instantly read the articles from issue 220 of and dive into the back issues right now on TeamRock+.

Choose the cover you want and get a copy of Classic Rock 220 delivered to your door.