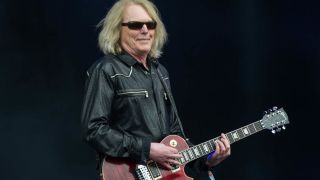 Thin Lizzy have announced live dates to mark the 30th anniversary of Phil Lynott’s death and to celebrate 40 years since their Jailbreak release.

They’re planning a handful of shows over the next year or so, with the first taking place at the Ramblin’ Man Fair, at Ashford, Kent, UK, on July 23 this year. The second will be onboard the Rock Legends Cruise from January 19-23, 2017. It departs from Fort Lauderdale, Florida.

Gorham says: “With Black Star Riders taking some time off the road to work on their third album, I thought it would be really cool to do some Thin Lizzy shows as it’s an anniversary year, to have some fun and to re-live the good old days.

“We will only do half a dozen or so dates to keep them special. For personal reasons Brian Downey won’t be with us but we have the incredible Mikkey Dee on the drum stool, which we are all very excited about. We will announce who is on bass shortly.”

Dee adds: “It’s an honour to be asked to play with Thin Lizzy on these dates. Being a lifelong fan, I am so happy and excited to be playing with the band on these shows. It’s going to be great.”

Tickets for Ramblin’ Man Fair are available via the festival’s website, while bookings for the Rock Legends Cruise are now being taken.

Thin Lizzy released breakthrough album Jailbreak in March 1976. It spawned three singles including The Boys Are Back In Town and the title track. Lynott died on January 4, 1986, after years of drug and alcohol abuse.

Lynott is the cover star of the latest edition of Classic Rock magazine. It contains 19-pages dedicated to the Thin Lizzy icon, including two interviews he gave in 1976 and 1977. It’s available in print, digital and via TeamRock+.