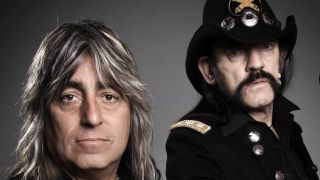 “Lemmy is gone, but this is not a time for sadness. He would not have wanted that. Don’t sit and cry in a fucking drink when you can drink it and celebrate a great, great life.

This is something that Lem and I talked about many times. He said, ‘All my life I’ve been living one big long party, and I’ve had the greatest job in the world.’ And I told him, ‘No, you had the greatest hobby in the world.’ Because Motörhead was not a job. We lived a dream – to travel all over the world, to play this great music, and to see all these smiling faces out there every night. He often said to me, ‘It can’t get better than this.’ He loved his life and he didn’t regret a minute of it.

“I’m honoured to have known this man and to have been a part of Motörhead for more than 20 years. I’m thankful for the time that we had together, and for how much I learned from him. He leaves a huge hole in music and he leaves a huge hole in my heart, and that’s never, ever going to be filled. But I feel more sorry for all of those people that did not have the pleasure to know him as closely as I did. Those people must be devastated because they just didn’t get enough of him. But I had so many years with him – we lived our lives together and created so much. I got enough of this guy. And I’m so grateful for that.

“The last time I spoke to him was right after the last show in Berlin [on December 11, 2015]. I was heading to Sweden to see my family and Lem was going back to LA. I told him that he’d really kicked ass in Berlin, and that he’d been incredible on that tour. He thanked me and we hugged. It felt good. I’m glad I got to tell him that.

“And it’s important to say this: I’m happy at the way it ended. We created a great album to go out with, Bad Magic. We finished with a sold-out mega arena tour. People came from every corner of the world to see the band, and we delivered a show that we were all proud of. Under the circumstances, it was incredible.

“I’m also happy that Lem managed to get back home to LA, and quietly, in his own place, say, ‘I’m done.’ Even in the very last stage of his life, Lemmy took charge of his own destiny. That was so him. He just said, ‘This is it. Put my boots on – I’m ready to check out.’ Maybe he thought, ‘It’s time for me to go and see Philthy Animal Taylor.’ Maybe they’re up there writing songs now. Who knows?

“And so, as sad as you are, think of this: the guy had an incredible run. He had an amazing life, and he loved every second of it. How much more can you ask for?”