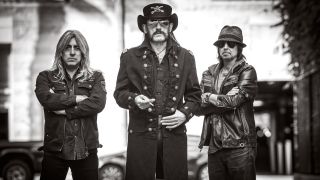 Motorhead have released a video for When The Sky Comes Looking For You. Taken from Bad Magic, the follow-up to 2013’s Aftershock, it was directed by Pep Bonet, who has been working with the band since 2008 and compiled their Röadkill book of photography.

The video was shot over two days in Palma de Mallorca with extras who’d applied to be part of the filming after Bonet made an online appeal.

Motorhead start their 40th anniversary tour at the end of January (dates blow). Last month the band were forced to cancel three shows when guitarist Phil Campbell fell ill, but he is now recovering.