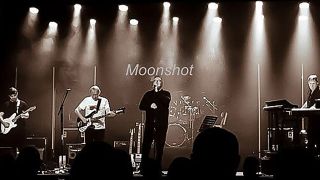 The 'legendary' Warringtonian prog rockers Moonshot have premiered their brand new video for Stupid Things That Mean The World with Prog. You can watch the whole video below. The track is taken from the band's Worlds Of Yesterday album, which was released through Plane Groovy in January.

“Reaching the pinnacle of 1980s cheese (the era the song was recorded in), Stupid Things That Mean The World stands in stark contrast to the more pastoral images for Worlds Of Yesterday and reflects the shift in Moonshot's musical direction over the decades," the band tell Prog. "Reputed to have been a favourite party song for the young Angela Merkel, Stupid Things That Mean The World had the unusual distinction of being a huge hit in both East and West Germany."

This is the second track from the album to be given a video treatment, following on from the title track which also featured on the cover CD of Prog 105.

The album released is available on CD and vinyl from Plane Groovy Records'  Burning Shed store.