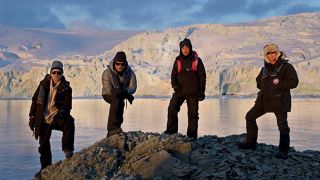 Metallica have made their Antarctica documentary Freeze ‘Em All available online.

The film follows their visit to the icy tundra to play an exclusive show for competition winners in 2013.

The band also set a record for being the first to perform on all seven continents – and all within a calendar year.

In the documentary, Ulrich says: “We love to get out of the house and explore and there’s no better place to do it than right here.”

The 20-minute film was shot by director Adam Dubin, who also produced A Year and a Half in the Life of Metallica in 1992.

Metallica say: “We found ourselves playing a gig for a couple dozen friends, fans and penguins at Carlini Base in the South Shetland Islands of Antarctica.

“It was truly the most unusual show of our career and an unforgettable journey.”

Fans can download the Freeze ‘Em All documentary by registering for a free fanclub membership.

Metallica are working on their 10th album, but have asked fans to be patient.