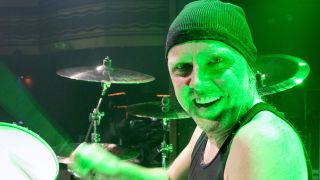 Up to 13: Ulrich in action (Image credit: Getty)

Metallica drummer Lars Ulrich says he becomes a “rock gnome” when he goes on stage with his colleagues.

That’s the way he describes the live transformation fuelled by the thrash icons’ aggression – which is something they’ve come to terms with over the years.

The band are continuing to promote the release of 10th album Hardwired… To Self-Destruct, due on November 18.

Ulrich tells BBC6 Music: “The old cliche is ‘turn it up to 11.’ I guess we turn it up to 12 or 13. But as I get a little older I realise there’s a slight element of getting into character.

“You’re up on stage, you’re in the moment, you’re with your bandmates. You turn into a little rock gnome or something!

“I’m not quite like that at 7.15 in the morning, when I’m trying to get kid number three to finish his fruit bowl.”

Frontman James Hetfield says: “I’ve come to terms with aggression being a part of me. I’m able to identify it and use it. Sharpen it at times, use it in the right places.”

At other times, he continues, “you just shut the box on it for a while and try to be normal.”

Despite aggression and anger featuring as strong themes on Hardwired… To Self-Destruct, Hetfield reports that Metallica try not to be too specific.

“We stay away from politics, from religion. That just seems to polarise people even more. We all have our own beliefs but we’re trying to connect with people, and it seems like political views don’t do that as much as music does.”

Meanwhile, Ulrich says the material on the upcoming title demonstrates the band at “the leanest we’re capable of,” adding: “The last record, as it went along, kept getting bigger and bigger. The songs got longer endings and that type of stuff.

“This record was quite different – the songs got tighter, leaner and more concise. I feel this is Metallica at the leanest we’ve been for a while.”

The band continue to add dates to their upcoming touring schedule, after playing an intimate fan club show earlier this week.

Metallica's Lars Ulrich thinks about Cliff Burton 'all the time'