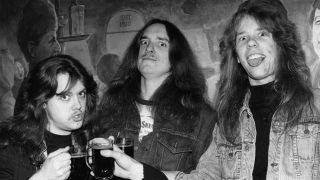 Lars Ulrich has paid tribute to Metallica’s late bassist Cliff Burton on the 30th anniversary of his tragic death.

Burton was 24 when Metallica’s tour bus crashed in Sweden on September 27, 1986. He was killed in the accident.

Ulrich says that he thinks of his friend most days, but anniversaries are more painful than other days.

The drummer tells Metal Hammer: “He’s continuously a part of our legacy. There are days when I still think about him. Today is a, I hate the word ‘anniversary’, but today is a more relevant Cliff Day because of the date.

“I’m always aware of the date. I think that, when you’ve been around for 35 years like we have, and you actually sit down and go through everything and plant flags on the calendar, there always so many anniversaries, but obviously, September 27, 2016, feels like a very significant date.

“I’m thinking about him all the time.”

Yesterday Burton’s father Ray revealed how his son was inspired to take up the bass guitar by the opening theme of TV cop show Barney Miller.

Burton was also remembered by Metallica’s first managers Jon and Marsha Zazula in a feature published by TeamRock.

Meanwhile, Metallica have been announced as part of the lineup for the 2017 Lollapalooza festivals in Brazil, Chile and Argentina.

Lollapalooza Brazil takes place on March 25 to 26 at Autodromo de Interlagos in Sao Paulo, the Argentina leg takes place from March 31 to April 1 at Hippodromo de San Isidro in Buenos Aires and the Chile event is held from April 1 to 2 at O’Higgins Park in Santiago.

Metallica’s 10th album Hardwired…To Self-Destruct is released on November 18 via the band’s own Blackened Recordings label.

Megadeth guitarist was jealous of Metallica's Master Of Puppets