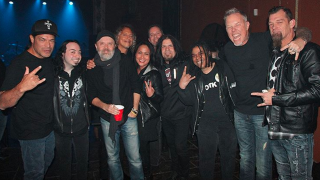 At their recent gig in Toronto, Metallica hung out backstage with the tribute band their legal team nearly sued.

Earlier this year, Metallica’s lawyers sent a cease and desist letter to Canadian band Sandman, ordering them to stop using Metallica’s name, font or logos to advertise their shows.

But when Lars Ulrich and co got wind of the letter, they stepped in and gave Sandman the licence to use their name and logo for a nominal fee of $1. And when the thrash giants played at Toronto’s Opera House this week, they met the members of Sandman backstage.

They have since posted a picture of the two bands together on Instagram, with the caption: “Hanging with Sandman, Canadian tribute band.”

Also while in Toronto, Metallica announced they would donate proceeds from the gig to the city’s Daily Bread organisation.

Meanwhile, the band have released a behind-the-scenes look at the photoshoot for the cover of their new album Hardwired… To Self-Destruct. The album’s cover art “confuses” the band, they said in a recent interview.

It features an eye-catching collage of all the individual members’ faces. The video can be viewed below.

Metallica have a number of tour dates lined up, with more expected to be announced in due course.