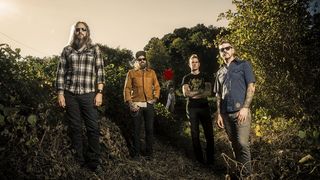 Metal Hammer have named Mastodon’s Emperor Of Sand their album of the year for 2017.

It’s topped the Critics’ Poll of the year’s finest albums, with the top 100 list available in the brand new edition of the magazine, which is on sale now.

Mastodon’s seventh album launched in March, with drummer and vocalist Brann Dailor telling Metal Hammer: “It’s amazing whenever anybody wants to give us an award! We definitely hold Metal Hammer in high regard as a publication and as a barometer that points people in the right direction as far as our scene is concerned.”

He continues: “I think that things have gotten a little more extreme but also a little more avant-garde, with Myrkur and Code Orange and a number of others.

“There will always be a bed of experimental heavy music happening, whether you know about it or not, but I think more of it is rising to the surface, which I think is pretty exciting.”

Last week, Mastodon received Grammy nominations in the Best Rock Album category for Emperor Of Sand and in the Best Metal Performance shortlist for their track Sultan’s Curse.

The band marked the announcement by releasing a film documenting how they made Emperor Of Sand.

The new issue of Metal Hammer – featuring the top 100 metal albums of the year – is on sale now and also includes cover stars Machine Head, along with Avenged Sevenfold, Asking Alexandria, Code Orange, Arch Enemy and much, much more.