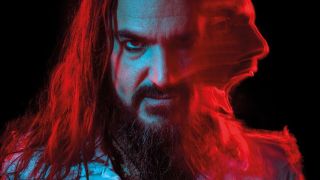 Robb Flynn has had enough of your shit. Please welcome Machine Head back to the cover of Metal Hammer for our end of year spectacular!

Machine Head are back, and they are more pissed off than ever. For the first time, Robb Flynn reveals the full story behind new album Catharsis, and why it’s time for metal to take a stand and fight back against the bullshit.

And when we say it’s an end of year spectacular, we mean it – which is why this issue comes packed with THREE great gifts – a Best Of 2017 CD, heavy metal wrapping paper and a 2018 calendar featuring HIM, Marilyn Manson, Ghost, Avenged Sevenfold, Babymetal and more!

Plus, we present the Big Review of 2017, featuring all the stories that mattered and brand new interviews with the bands that defined your year.

Avenged Sevenfold, Code Orange, Architects, While She Sleeps, Amon Amarth, Zeal & Ardor, Kreator, Power Trip and more – we bring you the ultimate guide to the last twelve months, through the eyes of the bands that made it all happen.

In fact, it was such an amazing year for heavy music that we’ve done our biggest critics poll ever! We give you the definitive countdown of the 100 Greatest Albums of 2017. From returning heavyweights to rising young heroes, it was a truly brilliant year across the board – but who got our album of the year? Pick this up to find out.

We also talk to Asking Alexandria ahead of the release of their brand new album, discovering how Danny’s returned to the fold saved their career – and why, now that he’s back, they’re only just getting started.

In this month’s Subterranea, we celebrate 30 years of Peaceville Records – honouring three decades that have redefined the underground over and over again

We also get in the studio with Tesseract, catch up with Nikki Sixx, find out the story of Japanese power metal sensations Lovebites and much, much more.

The new issue of Metal Hammer is in stores now and is available to order online. If you’re in the UK, you can use our store locator to find your nearest Metal Hammer stockist.

Metal Hammer issue 304 is also available to read on TeamRock+.