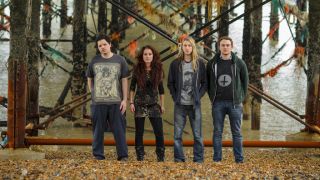 Maschine have amicably parted with keyboardist and vocalist Georgia Lewis, and named Marie-Eve de Gaultier as her replacement.

The rising-star prog outfit say Lewis wants to concentrate more fully on her folk music career, and describe their new member as an “elegant” addition to their lineup.

Luke Maschin’s outfit say: “Georgia has been a major asset and has played an important part in all of our achievements to date. Unfortunately, her energy cannot stretch as far as the role currently requires, as her true identity and full attention lies within her folk music.

“She’s been an incredible talent, and we’re all positive that wherever the music takes her, there will undoubtedly be greatness, persistence and professionalism.”

Lewis adds: “It’s been a great experience playing alongside such great musicians. I look forward to the release of Luke’s second album and I wish all the best to the band.”

De Gaultier, who contributed to Maschine’s acclaimed 2013 debut album Rubidium, reports: “I’m really honoured to join and really push my musical boundaries. I’ve been a fan of the music since the beginning – I can’t wait to be a part of the band’s next chapter.”

The band take part in a Prog-sponsored UK tour starting in October, alongside Haken and Leprous: