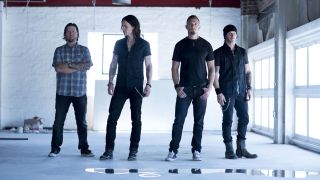 Last week, Alter Bridge revealed that their new album Walk The Sky would be released on October 18 through Napalm Records.

And in a new interview with Kerrang, Tremonti says the changes weren’t confined to the way they approached the recording – and reveals that Walk The Sky will have a different feel to what they’ve done before.

He says: “It’s like a John Carpenter movie – this old school synth-wave kind of vibe. Somebody might hear the record and have no idea that was intended, but for a batch of songs, I tapped into some old loops that I either created or found randomly online.

“I worked with them in the background to inspire me to go in a different direction. I loved working like that!

“We challenge ourselves to not repeat ourselves and find new inspiration to add a different layer to what we do. It’s particularly challenging when you’ve had so many records, but when I showed Myles what I was thinking he absolutely loved it and was on board right away.”