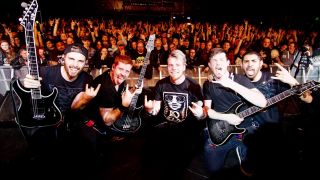 London metallers The Raven Age were recently granted the opportunity of a lifetime – to tour the UK with the one and only Anthrax! From Birmingham to Norwich, via Scotland and the north, life in the back of a van (or a broken tour bus) wasn’t going to be easy, but opening up for the thrash titans every night definitely made up for it.

To give us a glimpse on what it’s like to tour the UK supporting one of the biggest bands in metal, The Raven Age sent us over a ton of photos for a special tour diary. It’s not all glitz and glamour when you’re starting out, but when people bring you whisky it makes everything okay.

The Raven Age will release their debut album Darkness Will Rise on March 17, via BMG.

Metalcore crew The Raven Age are coming for metal’s throne