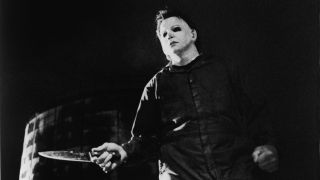 John Carpenter is the Master Of Horror. Throughout the 70s and 80s he gave us some of the greatest movies in the horror genre, not just through visuals but the sinister, spooky scores that soundtrack the malevolent mayhem on screen.

From his 1969 short film Captain Voyeur through to the 2018 Halloween sequel, Carpenter's compositions have become iconic. Here are five of his creations that you need to hear.

That sinister piano tinkling. That relentless, fast-paced beat. Those hammering synth lines. Perhaps the most instantly recognisable theme in the history of horror, Halloween changed the way composers used music as a force to expand upon the mythos of their films. Forty years on, it’s still the daddy, and it still sends a shiver down the spine – much like Michael Myers himself.

Sounding like a downtuned, warped sister theme to Halloween, John added in a slow, menacing, bassy undertow that dragged the track into other-worldly realms. A classic slice of synthesised 80s guitar at the song’s climax only heightens the sense of impending, ghoulish doom, making it the perfect accompaniment to the classic, maritime ghost story for which it was written.

Part of what John labels his ‘Apocalypse Trilogy’, the theme to this supernatural nightmare comes in swinging with blasts of hellacious synths and demonic choir affects. A booming drum dripping in frenzied bursts of keyboard ramp up the tension as the song reaches its urgent, eardrum-bursting zenith.

What initially sounds like the pounding drum intro to Iron Man suddenly descends into something out of a whisky-soaked Western on Mars. Light flicks of guitar, wholehearted flashes of harmonica and a gorgeous, bluesy piano line make this one of John’s less spooky, but equally impactful hymns. The high-concept sci-fi that spawned it is one of his most underrated classics, too.

In the new issue of Metal Hammer, John Carpenter is interviewed by synthwave pioneer Perturbator. In stores now and available to order online.