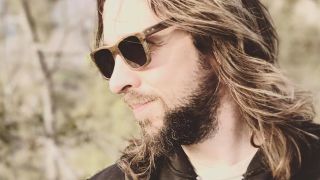 Marco Minnemann has announced that his next record will be titled Borrego.

The drummer, composer and guitarist has just opened pre-orders for the record via PledgeMusic, has issued a teaser video and revealed that Rush’s Alex Lifeson and Joe Satriani are among the guest musicians on the record. Watch the trailer below.

Minnemann says: “It is my utmost pleasure to announce my new album, Borrego – an album inspired by the hauntingly beautiful Anza Borrego desert landscape and its stories.

“The album also features Alex Lifeson from Rush on guitar, who also co-wrote one of the centre pieces of the album and delivered amazing and beautiful guitar arrangements on three of the tracks. And then, Joe Satriani, who performed stunning guitars on four of the songs.

“I feel very honoured and grateful for having these legendary artists with me on this release.”

Minnemann adds: “Other fantastic contributors are Elizabeth Carey on violin, Brigitte Roka and Donna Zed on vocals – and Tony Levin on bass for one of the CD bonus cuts.”

Borrego will be released on July 29, with Minnemann offering a range of incentives for those who pre-order direct from PledgeMusic, including t-shirts, signed snare drum heads, autographed drum sticks and much more.