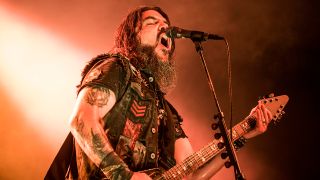 Machine Head, Papa Roach, My Chemical Romance, Mayhem, Abbath, Fleshgod Apocalypse, Wardruna and Heilung are among the latest bands to put a hold on touring activities due to the coronavirus pandemic.

Machine Head have postponed their upcoming UK and European Burn My Eyes 25th anniversary tour, saying in a statement: “Of paramount importance to us is the heath and safety of the Head Cases. We’ve worked hard with all our management, booking agents, and business associates to find other solutions or options, but the levels of risk to our audience and their communities is simply too high for our comfort level.

“In addition to that, we also have a unique group of extraordinarily passionate fans who travel from all over the continent to watch our shows. We are eternally humbled by the dedication and devotion of the Head Cases, however in this case, travel is something not recommended.

“So it is with deep frustration and regret that we are forced to make this announcement: The Burn My Eyes 25th anniversary tour is to be postponed and shows rescheduled for a later date, hopefully in the Fall, but possibly later.”

They add: “We look forward to our next concerts with you all, and the ability to publicly gather together and play raging heavy metal for you and vent all of our collective frustration, as a result of this insane moment in history, out in the circle pit.”

Papa Roach have been forced to cancel their upcoming shows in Paris, Tilburg, Dusseldorf, Hamburg and Copenhagen with Hollywood Undead and Ice Nine Kills due to the restrictions imposed on public gatherings.

The band say: "We are working with our team to reschedule these cities, but at the moment, nothing can be confirmed as the information is changing daily. Please be patient as we navigate through these necessary precautions. Hold on to your ticket and we will add a few more cities.

“Finally, thank you to all of you who came out to see us. Wash your hands and be safe!”

My Chemical Romance, meanwhile, have pulled the plug on their Japanese tour.

The band say: “The promoter of our Japan shows suggested that we postpone the shows in Japan for the safety of the public, and we are heeding that advice.

“We had very much hoped to have alternate dates confirmed before we announced the postponement to make sure our fans knew we had every intention of coming back. Somehow, word got out before we could do that.

“However, please know we are working on rescheduling shows and will try to announce those soon. We are terribly sad to postpone and even more distressed about what is happening the world over.

“Take good care and we hope to see you all as soon as possible. Please be good to each other.”

Elsewhere, Mayhem and Abbath’s joint shows in Seattle on March 17 and in San Francisco on March 20 have both been cancelled due to the limits of the number of people who can gather in public.

Seattle currently has stopped gatherings in excess of 250 people, while San Francisco has capped the number at 1000.

Fleshgod Apocalypse have also postponed their North American tour due to travel restrictions. The band had been due to fly in from Italy – the worst affected country in Europe – with the tour called off before the US Government suspended travel from European countries for 30 days.

Fleshgod Apocalypse say they are devastated about the delay, but vow to reschedule the dates for later in the year.

Wardruna have also been forced to postpone their Norwegian concerts after the the municipalities in Oslo, Bergen, Kristiansand and Stavanger implemented a ban for events with more than 500 people.

They’ve rescheduled the shows for April.

Finally, Heilung have had to postpone their planned French concerts in Rouen on April 10 and at the Echos & Merveilles festival in Toulouse on April 12 due to a curb on numbers of people gathering together. The band say they are currently working on organising new dates.

For up to date news on all tour and show cancellations and postponements due to coronavirus, bookmark our hub page.