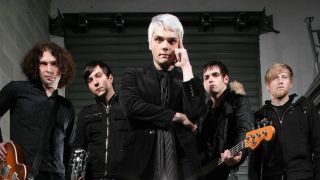 Named after an Irvine Welsh novel and formed in September 2001 by singer Gerard Way after he witnessed the attack on the World Trade Centre, My Chemical Romance came to define alternative rock in the 2000s.

Their first album, rough, unpolished and darkly gothic, was produced by the Thursday singer Geoff Rickly and introduced them as intense, artistic and vampiric. Following its underground success, they released their major label debut, Three Cheers For Sweet Revenge, which made them stars on the strength of the anthemic punk rock of I’m Not Okay and Helena. But third album, The Black Parade, was their masterpiece – a theatrical concept record that was by turns furiously intense and archly camp. Touring the wildly successful album was a draining experience and they attempted to redefine themselves following it and struggled. After scrapping a record, they returned with 2010’s Danger Days but then split in 2013.

Here are their 10 greatest songs.

Shot through with gothic imagery, spooky mansions, romance and death, the lyrics are classic Gerard. But it’s not even the fact they are delivered via the thrillingly massive melodies that pepper Three Cheers For Sweet Revenge that make this song, it’s the urgent guitar underneath that makes it shine. Listen to the building intro as it moves into the pre-chorus, drums rattling along at all kinds of a lick. Then, just as the chorus kicks in, Toro and Iero unleash such a vital riff that it’s impossible not get carried away with it. Not one of their more generally celebrated songs, but it should be.

A song which seems to sum up all the elements of the band’s second album: furiously fast punk and searing, jagged riffs; frantic and breathless vocals; then a melody so big and immediate it lodges without ever leaving; oh, and super sharp lyrics. The glorious Ghost Of You was Three Cheers’s final single, You Know What They Do To Guys Like Us In Prison was the sexually playful bridge between the second album and The Black Parade, but Thank You… got heads banging down the front.

Leaving SING – a worldwide hit for good reason – the instantly appealing Bulletproof Heart, Planetary (GO!) (a band favourite), and a personal favourite S/C/A/R/E/C/R/O/W out of a best of My Chemical Romance list is difficult, but The Kids From Yesterday is a song of such heart and punch that it’s impossible not to include it. On each of My Chemical Romance’s albums there’s a clue as to where they were likely to head next (Headfirst For Halos on the debut, You Know What They Do… on the second, Famous Last Words on The Black Parade). It’s tempting to wonder if The Kids From Yesterday – mature, commercial, arena-sized emotions – was where they would have gone with a fifth album.

My Chemical Romance scrapped an entire album before making their fourth and final record, Danger Days, and were at something of a creative dead end. Gerard had been determined to ditch the characters and concepts that had informed previous albums and it hadn’t worked out. He headed out to the desert with his wife and young daughter to brood on matters, and out of nowhere came the thrilling, visceral and utterly joyful Na Na Na. Simple, searing and sizzling, he preaches about capitalism and fame while the song itself gave him and the band the impetus to put the rest of the record together.

Up in the attic of the band’s first drummer, Matt Pelissier, the nascent My Chemical Romance worked on a very rough demo tape. They slipped to it Alex Saavedra, owner of the local Eyeball Records, who passed it on to the singer with Thursday, Geoff Rickly. The song that grabbed his attention was Vampires Will Never Hurt You. “I had never heard anything like it,” said Rickly and immediately decided he wanted to produce them. Brooding, building, intense and dark, it would go on to define early My Chemical Romance alongside other early brilliance such as Honey, This Mirror Isn’t Big Enough For The Two Of Us and Our Lady Of Sorrows. Gerard’s vocal performance on it, incidentally, came immediately after he had suffered tooth pain and Saavedra, fed up with him bitching about it, punched him in the mouth.

On an album of great songs – the haunting piano-led Cancer (written, incredibly in eight minutes), Dead!’s bombast, The Sharpest Lives, Sleep’s grandeur, and so on – it’s tough to pick one more standout from The Black Parade. Mama, though, was a song that lit up the record. Initially written by Toro in response to a jokey challenge – that he couldn’t write a polka – the song took on a life of its own. Producer Rob Cavallo told the band to simply enjoy themselves on it. And so they did: layering it with sound after sound, while Gerard delivers one of the vocal performances of his life. And then, quite brilliantly and unexpectedly, Liza Minelli pops up for a stagey cameo. The camp, swaggering, vaudevillesque song was the biggest risk My Chemical Romance took on The Black Parade and, the fact it pays off, is part of the reason the album works so well.

During recording sessions for the band’s second album, Three Cheers For Sweet Revenge, My Chemical Romance’s A+R man, Craig Aaronson, and producer Howard Benson ganged up on them. The pair had heard a rough demo the band had recorded which featured a long song which, six minutes into it, included a chord progression that struck them. They forced the band to work on it and, to appease them, My Chemical Romance did so – almost reluctantly. “Ray played the chords on a clean guitar and Gerard just sang,” recalled guitarist Frank Iero. “And suddenly, it was just the most beautiful song we ever heard. We all went: ‘What the fuck? Why haven’t we put this on the album?’” That throwaway song would go onto to launch their career: an anthemic, emotive and quite brilliant slice of angst and outsider defiance.

Originally called The Five Of Us Are Dying, and sketched out as early as sessions for My Chemical Romance’s very first album, Welcome To The Black Parade was the thrilling, vaudeville, bombastic centrepiece to their greatest album. It was a tricky song to perfect, with the band playing with its tempo and arrangement constantly, and they never felt they had nailed it during sessions for The Black Parade. “It felt like the pressure was tearing us up,” said Gerard. Until, that is, producer Rob Cavallo came up with an idea for the introduction to the entire album – a few dinked notes on a piano that were intended to recall a marching parade approaching, and would then also fade out at the end of the record. Cavallo left it with the band for a few weeks and, when he came back, they admitted: “Er… we fucked with your piano.” “Goddamn, I really liked that,” replied Cavallo. “No, no,” the band replied, “we stuck it onto this song. Listen…” And when he did, the producer told them: “This is the greatest thing I ever heard.”

Worn out after touring their first album I Brought You My Bullets, You Brought Me Your Love, My Chemical Romance returned to their homes in New Jersey. The following morning, the woman who had helped raise Gerard and Mikey, and who had inspired the singer to take up art and music, their grandmother Elena Lee Rush, died. It hit Gerard hard and though most of the songs for their second album, Three Cheers For Sweet Revenge, had already been written, he set about penning a tribute to Elena. “Helena is a really angry open-letter to myself,” said Gerard. “It’s about why I wasn’t around for this woman who was so special to me, why I wasn’t around for the last year of her life. Self-hate is always a big part of the lyrics.”

My Chemical Romance’s recording sessions for The Black Parade were intense in the extreme. They took place at a huge Hollywood villa, The Paramour, that the band were convinced was haunted. In it, they frequently had highly personal, in depth and damaging discussions about their feelings for one another while also putting themselves under huge pressure to record a masterpiece. “It wasn’t the happiest time of our lives,” said the band’s singer Gerard Way. “We were questioning our mortality. I think it’s a very human record underneath the bombast and the theatrics.” In the midst of this, Gerard’s brother Mikey, the band’s bassist, suffered a breakdown and left them, throwing the band into a period of crisis and inertia. But out of the writers’ block they suffered came their best song. Late one night, guitarist Ray Toro was fiddling with a tune nominally called The Saddest Music In The World. Gerard joined him, improvising lyrics about his brother and his frustration that he had walked out on the band. Haunting, angry, wistful, regretful and imploring: it was heartfelt and desperately personal. When Mikey heard it, despite knowing it was about him and not entirely complimentary, he called it “an anthem”. That’s how good it is.

Tom Bryant is the author of The True Lives of My Chemical Romance: The Definitive Biography, out now through Sidgwick & Jackson.