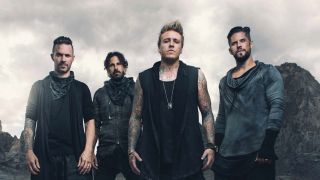 A is for… Addiction

Jacoby Shaddix (vocals): “It was a lifestyle for me; I just wanted to not feel sometimes. Booze was the one for me, I couldn’t stop. It starts with one but then ends with 100. It’s fun ’til it starts to be not fun anymore. It wasn’t a pretty sight.”

C is for… Clarinet

Jacoby: “I haven’t picked up mine in years, but my son Jagger wants to play clarinet! I think next year he’s going to join the school band and sit next to the hot chick.”

D is for… Dick

Jacoby: “I’m still Coby Dick! There’s remnants of Coby Dick still in me! That was a rad phase of my life; we’ve started playing Infest again and I drop that lyric, ’My name’s Coby Dick, Mr Dick if you’re nasty!’ I’m like, ‘Yeah, that’s right!’ It’s like Wu Tang – they’ve got a million AKAs.”

E is for… Evolution

Tony Palermo (drums): “We’re ever-evolving in terms of our influences. We have a wide range of influences and you can’t help but inject some of that. Even though it’s still Papa Roach, we’re not that band that’s going to write the same record twice.”

F is for… Fear

Jacoby: “Face. Everything. And. Rise. [is the name of our latest album]. Fear is something we all face every day, in big and little ways. If we succumb to fear, it can paralyse us and stifle us from chasing after our dreams. That is not how I choose to live my life. I want to live a productive life, so I’ve got to face those fears. Usually, when I do, I come out on the other side. What do I fear? Impotence!”

G is for… Getting Away With Murder

Jerry Horton (guitar): “I love that album. I think there are very creative moments on that record, and we were pretty daring in our way of styles. There are some parts of it that sounded pretty uncomfortable, but it worked out in the long run!”

H is for… Horton, Jerry!

Jacoby: “Our guitarist, Jerry Horton, the heartthrob! I ask myself, when I get in compromising situations, ‘What would Jerry do?’ Then think he sure as shit wouldn’t be doing what I’m doing so I better beat it!”

I is for… Infest

Jacoby: “Infest [2000] was our breakout statement to the world. It’s personal, it’s got a political edge, it’s very introspective, it’s got violence in it. It’s a powerful record.”

J is for… Johnny Vodka

Jacoby: “I think someone in the band dubbed me Johnny Vodka. I lived up to that name! Vodka was my drink. I had a bar inside my house and I had ‘Johnny Vodka’ painted above the bar. Shortly after that I hit rock bottom and I had to clean up. But when we played Japan, Jamey Jasta left me a note in our dressing room saying, ‘Hey Johnny Vodka!’ Ha!”

Jacoby: “He’s cool, he gets down to business. He has this vast knowledge of what a song should end up like. On the new record, there’s so much on it, but it all makes sense! I’m in love with his production.”
Tony: “He’s just a great person as well. When you’re making a record, you just want to shoot the shit and have fun and there was plenty of that in the process as well.”

L is for… Love

Jacoby: “What’s love like for Papa Roach? It’s a fucking battlefield! We’ve gone through so much that it’s hard but we have some strong ladies. It’s a trip, but me and my lady love hard. We’ve been through some hell. It takes very special women to love dudes in rock bands. At the end of the day, my lady sees something in me that I don’t see in myself.”

M is for… Maria Brink

Tony: “She’s on the album F.E.A.R. [on the track Gravity] and her contribution is exactly what it should be. We’ve done a lot of touring with In This Moment. She’s awesome! She brought a certain fire to the track. There’s a mutual respect and it seemed like the right timing.”

N is for… Nu Metal

Jacoby: “There are some great nu metal bands, i.e. Korn, Deftones… Papa Roach! But there were some bands that I couldn’t fucking stand! For us, it was kind of a blessing and a curse because everyone pigeonholed us, but we had a punkish-ness about us. We were the nu metal band that were on Warped Tour. We had this ability to go out and shine in different environments.”

O is for… Obsession

Jacoby: “I was a big fan of Mr Bungle. I wanted P-Roach to be the most experimental, weird band possible and we achieved it on Potatoes For Christmas. It’s a phase in our career that I look back on and smile. P-Roach has had a few lives and there are some people that jump from band to band. Papa Roach is my first band, so I get to have all my successes and failures in Papa Roach.”

Q is for… Queen

Tony: “I was listening to Queen when I was young. They’re all so talented. They’re the only band where each member has written a number one single!”
Jacoby: “That’s what made Queen so unique. Everybody had a voice that was heard.”

R is for… Rapping

Jacoby: “I was just jaded on it, but there’s some dope rappers out there. Royce Da 5’9, he did a record with Eminem, as Bad Meets Evil, that literally got me back into hip hop. I heard that and was like, ‘Fuck yeah!’”

S is for… Sobriety

Jacoby: “It’s tough. Sometimes I want to smoke weed. I think, ‘What’s wrong with smoking a little weed?’ But if that’s OK, popping a pill might be OK, and if that’s OK, then what’s next? It’s a slippery slope.”

T is for… Two Thousand And Fifteen

Jacoby: “It’s going to be the best year ever! I can’t wait to release the record and get out on the road, and bang it out live!

U is for… Union Black (Skindred album featuring Jacoby)

Tony: “We love those Skindred guys! We’d love to tour with them!”
Jacoby: “We would definitely push each other to the next level. Great live band; great people. Benji [Webbe, frontman] is like a brother.”

V is for… Vacaville, CA

Jacoby: “Vacaville is a small town, not much going on. That’s why we started a rock’n’roll band, because there wasn’t shit to do. That was our ticket out of there. As much as I wanted to get the fuck out, it was a great place to grow up.”

W is for… Warriors

Jacoby: “A good friend of mine was like, ‘Hey man, why don’t you holler at Royce Da 5’9?’ This dude tracked his number down for me. I was like, fuck it, shot in the dark. I called up his cell phone and was like, ‘It’s ‘Jacoby from Papa Roach, I’m a huge fan, what do you think about coming on a track called Warriors?’ He was like, ‘I’m into it!’ I got goosebumps.”

X is for… eXtra Mile

Jacoby: “Do we take advantage of everything that comes our way? For the most part. We shoot some shit down, there’s some stuff that comes our way that’s not good for our career or lives. As we get older we get a bit more selective.”

Jacoby: “Are Papa Roach in a good place right now? Most definitely, yes. We’re playing arenas – that’s a good place to be. We played the new single for the first time recently and it fucking went off!”