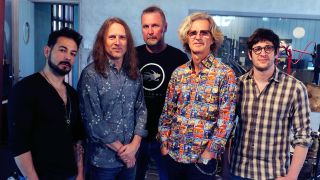 The Flower Kings have released a stream of their new single Black Flag.

It’s the first taste of material from their upcoming double album Waiting For Miracles, which will launch on November 8 via InsideOut Music.

The band say in a statement: “Here’s Black Flag – a fine example of what you can expect of the new record, yet just a glimpse at the rich variations this new opus offers.

“It is a huge tribute to when music was played by a real band, a time when being creative in the studio meant progress in all direction and fusing all styles – this is a band creating its very own special cinematic sound, built upon the 60s and 70s and contemporary prog, rock and orchestral music. A fine display of instrumental and vocal interplay from all members – the trademark Flower Kings sound is back, but yet with a new twist.

“This track even has guesting from former The Flower Kings’ bass player Michael Stolt. This time The Kings set sail for a big adventure.”

Waiting For Miracles will be released on 2CD, 2LP/ 2CD and on digital and streaming platforms, with the cover art created by US artist Kevin Sloan.

The Flower Kings will head out on tour across Europe throughout December with Kayak.

The Flower Kings: Waiting For Miracles