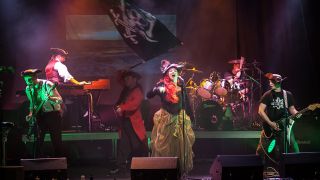 It was announced in November that the band would release the track - now it’s out and Prog readers can listen to it below.

A statement on the release reads: “The new single is penned in the style of a Victorian poem, reflecting of the dark and spectral side of the festive season, and recalls the days when rock giants such as Greg Lake or Jethro Tull would break from tradition to provide something to cater for a different musical pallet during the festive season.

“Driven by the piano and acoustic guitars, the sound is fresh and bright, yet with dark undertones.”

Winter’s Mourning is also the band’s first release as a six-piece, with the band previously reporting that touring members keyboardist Ben Bell and vocalist Keri Farish had joined the lineup full-time.

The single is now available to purchase via Gandalf’s Fist’s Bandcamp page.

Gandalf's Fist: A Day In The Life Of A Universal Wanderer