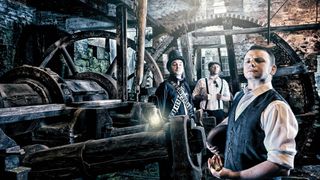 The worlds of science fiction and fantasy have a long-held fascination with the concept of the mythical subterranean realm. In 1864, French fantasist Jules Verne published his novel Journey To The Centre Of The Earth, which of course inspired keyboard king Rick Wakeman’s 1974 concept album of the same name. In 1895, HG Wells created the malevolent Morlocks – a race of primitive, carnivorous cave-dwellers – for his book The Time Machine. In 1914, Tarzan author Edgar Rice Burroughs released At The Earth’s Core, the first in a series of volumes set in the hypogean interior world of Pellucidar. In 1961, the first issue of Marvel Comics’ Fantastic Four featured a fossorial foe named the Mole Man. Not to be outdone, two years later, in Journey Into Mystery issue No.97, the Mighty Thor battled Molto, supreme warrior of the Lava Men.

All of which brings us to the latest in a long list of illustrious underworld imaginings: The Clockwork Fable, the new album by Cumbria-based creative genii Gandalf’s Fist. This hugely ambitious three-CD release is set in the dark and steamy surroundings of Cogtopolis, a city beneath the surface, founded by the surviving members of mankind following an unspecified global catastrophe. As the centuries progress, Cogtopolis develops into a microcosmos following its own crude laws, rules and religions.

The Clockwork Fable tells the tale of central characters Eve and her mentor Tinker, who find out that the sun has returned to shine above ground. We follow the pair’s trials and tribulations as they attempt to flee from the hell of Cogtopolis and return to the Earth’s surface.

As Gandalf’s Fist vocalist Luke Severn explains: “It’s basically Escape From New York, only set in an underground Victorian town – a steampunk environment, if you will – minus Kurt Russell, with 100 per cent added jokes about celery-legged baboons.”

Multi-instrumentalist Dean Marsh expands: “It took pretty much exactly one year from the genesis of the idea to having it as the finished package. It was talked about for a while between Luke and I that we wanted to do something based around a subterranean aesthetic. It wasn’t until the morning of my wedding, where Luke was best man, that the idea really started to form… ‘Oh, there should be a clockwork child and a pedal-powered zeppelin!’ Next thing you know we’ve created a workable post-apocalyptic socio-economic model before our second breakfast whisky.”

The Clockwork Fable, Gandalf’s Fist’s sixth studio album, is the crowning achievement of a career that began with 2011’s The Master And The Monkey and has been gathering momentum steadily ever since. The band’s music is an intriguing amalgam of neo-prog, New Wave Of British Heavy Metal influences and traditional folk music. But what really sets them apart is their awe-inspiring imaginative power… and bizarre sense of humour. How important is the humour factor in the band’s work?

“Massively so,” stresses Severn. “Our albums are glimpses inside mine and Dean’s heads, and the bizarre conversations we have. I couldn’t imagine doing a straight album of love songs or 11 generic four-minute tracks. There’s plenty of people out there doing that – it’s not our thing.”

As an example of the duo’s sense of absurdity, The Clockwork Fable features a character called Seamus McSausage, named after a wire-haired Dachshund that lives in Marsh’s kitchen. “He’s a grumpy sod and I reckoned he’d be even grumpier if he ever figured out he’d been left off the album,” the singer chuckles. “There’s a real British sense of humour on this record. If you start to take yourself too seriously and think you’re writing the best thing since that time Billy Shakespeare went on holiday to Denmark, you’ll soon come unstuck. Before you know it, you’ll have written some pretentious tosh that’s completely devoid of any personality.

“When you read a good book, you can feel the writer’s sensibilities oozing through the page. We tried to do the same here – we figured if we were having fun writing the story, people would have fun listening to it.”

As befits its wide-ranging concept, The Clockwork Fable is available as a lavish package. The trio of CDs are housed in a wonderful fold-out sleeve with beautiful illustrations and an informative 24-page booklet. There’s even a page explaining the complexities of the Cogtopolis alphabet (or ‘Cypheridia’, as the band call it). Us lucky media types were also treated to a bonus gift in the form of the Cogtopolis Traveller’s Guide, cheekily designed so it resembles a genuine handbook produced by travel book publisher Lonely Planet. Among the advice offered: ‘Top tip! Bicycle-operated trouser-presses may seem like a novelty, but they are deemed an essential appliance and regarded as a status symbol in many areas of the city.’

‘Do! Ensure you pack plenty of badger repellent. The summer steam cycle can drive swarms of irradiated Mustelidae on unsuspecting picnic makers.’

‘Don’t! Ride the pedestrian conveyor during Shadowmas. They are particularly crowded during the festival season.’

“Cogtopolis? Let’s be careful out there,” smiles Marsh. “But seriously, we self-fund absolutely everything we do. Not only that, but we design it too. It’s pretty much part of our band ethic at this stage – we try to do everything ourselves which is why 100 per cent of the music was recorded, mixed and mastered by ourselves at Fist HQ.”

“We’ve been renting out Chris [Ewen, bass] to cover the cost,” says Severn. “He’s available for house viewings or shopping trips. You’ll always get a bargain, shopping with Chris.”

Theoretically, would Marsh and Severn enjoy living in Cogtopolis?

“I’m not sure I could stand the noise,” the former states. “There’s always something jostling about, clanking and hissing in your lughole. Now, I get annoyed if someone switches on the kitchen fan when I’m trying to watch George Clarke build an egg-shaped tree house on Channel 4, so I think Cogtopolis would drive me to distraction.”

Severn: “It’s not somewhere I would recommend as a holiday spot, what with all those religious zealots and mad old city officials. I’d rather have a fortnight in the Med before I’d consider a weekend in Porfan, which is the black market area of Cogtoplis. It’s full of thieves and ruffians.”

“What really helped was that we had a good story that was well written,” says Marsh. “I have a degree in English and teach creative writing as part of my day job. Luke is an immensely well-read bloke and Chris has an eye for surrealist dialogue: he’s essentially a walking bag of catchphrases. We were able to put the entire story into an industry-standard 50-page radio script, complete with scene directions, so it was really clear to the actors what they were getting on board with. Initially we had Mark Benton involved, who is a huge prog and rock fan, and he helped massively in helping to shape the ensemble. I really can’t thank him enough. Zach was contacted on a whim and he was well up for it once he’d read the story.”

“We live in the internet age and, quite simply, without it, Gandalf’s Fist would not exist – we couldn’t do what we do without social media,” says Severn. “We reach out to people and sometimes it comes off, other times it doesn’t.”

Marsh adds: “The great thing about having those professional actors on board was that we could rely on their performances to drive the story forward and we could let our songs develop naturally, rather than filling the lyrics with heavy-handed exposition.”

If The Clockwork Fable was made into a movie or stage show, who would play the lead roles?

Severn: “I love the actors we had. I’d love any of them to come back if they were able. I’d be more excited about a prog orchestra, including a bassoon-powered trifle cannon to fire into the crowd at the opportune moment. Plus seeing the zeppelin in all its glory would be awesome.”

How do Gandalf’s Fist plan to promote The Clockwork Fable? Any live shows in the pipeline?

“We’ve got a few little things up our sleeves but the main thing is that we’ll be performing at HRH Prog in March next year,” says Marsh. “Since our last festival appearance I think we’ve amassed a bulk of songs that are probably a sizeable cut above what uninitiated listeners would have heard from us before. It would be great to do a full stage production of the album at some point, but that would be something for way down the line.”

“We’re really excited about HRH Prog – there’s a great bill there – but that’s it for now,” says Severn. “Unlike a lot of other bands, we have to hold down full-time jobs to do this. That’s the only downside of being an independent band, although we’re pretty certain a label wouldn’t have signed off a three-CD concept album with an hour’s worth of actors talking on it… I’d rather have the freedom to produce what we want.”

“I really look at our new album as a statement,” says Marsh. “We have no money and zero resources but we can tell a good story and carry a decent tune. There are so many creative directions we can go in next, but the main thing is that we’ll try our level best to make it even more fucking awesome than The Clockwork Fable.”

Finally, we notice that Dave Oberlé of Gryphon fame is one of the special guest musicians on The Clockwork Fable. Did he at any point threaten to whip out his crumhorn?

Marsh: “Constantly. But it wasn’t until the 14th-Century Feudal Pork Kazoo came out that we started to get worried.”

Severn: “No, but we were able to offer him a lovely selection of cream horns.”

The Clockwork Fable is out now. For more information, see the band’s website.