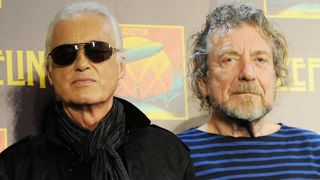 Page and Plant have been in court every day (Image credit: Getty)

The jury in the trial over Led Zeppelin track Stairway To Heaven have retired to consider their verdict after both parties’ lawyers were involved in a heated exchange during closing statements.

Their deliberations enter a second day today (June 23) after lawyer Francis Malofiy summed up his legal arguments before Judge Gary Klausner in a Los Angeles courtroom yesterday, and Led Zeppelin attorney Peter Anderson did the same.

The band are accused of having plagiarised Spirit track Taurus, which was released three years before 1971 anthem Stairway To Heaven. The case centres on the descending chord sequence at the beginning of their song, and its alleged similarity to a part of Taurus.

Led Zeppelin frontman Robert Plant and guitarist Jimmy Page have been in court for each day of proceedings, and both have given evidence. Bassist John Paul Jones, whose name was dropped from the case before it began, also gave evidence last week.

Judge Klausner admonished both counsels during the summing-up phase yesterday, saying at one point: “Any other catfights or anything else?”

Malofiy returned to a statement he’d made when the trial opened last week, saying the matter rested on the concept “give credit where credit is due.” He went on: “We respect and value creation. ‘Creation’ does not mean copying. ‘Creation’ means doing something that is unique and memorable.”

But Anderson argued that Malofiy had failed to prove that Page or Plant had ever heard the earlier work, saying: “There has been no evidence showing that Taurus was performed at any performance where members of Led Zeppelin were in attendance.”

Anderson cited expert witnesses who, while agreeing there were strong similarities in the two pieces, the chord sequence was “commonplace” and could be traced to the 17th century at least.

He also argued that Malofiy’s assessment of the money generated by Stairway was exaggerated. Defence figures suggested that the song had brought in between $3.4m and $13.5m over the five-year rights period discussed in court – but Anderson cited a figure of $868,000.

Led Zeppelin have further claimed that late Spirit guitarist Randy California, who wrote Taurus, had signed away the rights as part of his record deal, meaning his estate were not competent to sue over the song. They’d used that position to attempt to have the case cut short earlier this week, but Judge Klausner refused.

Malofiy has asked the eight-person jury to grant one-third of the writing credits to California’s estate. Their deliberations continue.