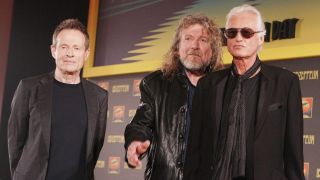 The jury in the trial over Led Zeppelin classic Stairway To Heaven has heard that the band’s catalogue earned around $60m over the years 2011 to 2014.

The testimony came from music economist Michael Einhorn during the fourth day of the trial in Los Angeles, before judge Gary Klausner.

Another expert said that the chord sequence at the centre of the case is at least three centuries old.

Einhorn spoke after Led Zeppelin bassist John Paul Jones made a brief appearance at the witness stand. He said that guitarist Jimmy Page had never mentioned 1967 Spirit track Taurus, which the band are accused of having copied for 1971 song Stairway. Asked if it had ever been discussed, Jones said: “No.”

He was excused after 15 minutes and left the courtroom, where bandmates Page and Robert Plant were present.

Lawrence Ferrara played an electric piano to demonstrate his argument that the similarities between Stairway and Taurus were “absolutely meaningless” and “commonplace.”

Referring to the descending chord sequence at the beginning of Stairway, he added: “That progression has been around for 300 years, dating back to the 17th century. In the 20th century, before Taurus, a large number of musicians, artists and composers also used it.

“They are a musical building block that no one can possibly own.”

The trial resumes on Tuesday.