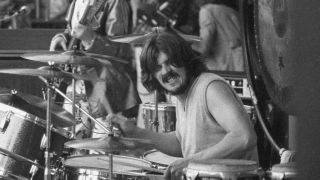 Has any drummer shaken the world as much as John Bonham? Unlikely, as Bonzo’s Top 10 best Led Zeppelin songs prove. From snare drum stampedes, through hi-hat syncopation and jazzy interludes and sheer brutal power, Bonham was the percussive engine at the heart of Zeppelin – just ask anyone from Dave Grohl of the Foo Fighters to Black Stone Cherry’s John Fred, or for that matter any of the hundreds of disciples who recently voted him the greatest drummer ever.

Right from the dramatic two beat opening, John Bonham puts the whole kit through its paces. That pioneering use of bass drum triplets heralded the arrival of a very special drummer. Doing things with a bass pedal that it took two of James Brown’s drummers to try and emulate – and they knew a bit about rhythm.

Zeppelin’s tongue-in-cheek attempt at reggae on Houses Of The Holy has often been mocked over the years, but if anyone doesn’t deserve the scorn then it’s Bonham. His wide-screen drumming lights up the track from the moment he opens proceedings with an invigorating snare and tom tom drum attack. He deservedly got the lead songwriting credit for his efforts.

An outstanding Bonham showcase from Zeppelin’s studio swansong, In Through The Out Door, that highlights the fusion influence of such jazz giants as Bernard Purdie and Alphonse Mouzon. Clock the percussive perfection at two minute 25 seconds when a blow of a whistle ushers in a Latin samba delight.

From the cymbal cashing intro through to the closing precision of the solo, Led Zeppelin IV’s second track is a veritable Bonham tour–de-force. In between, his total regard for the art of timekeeping is a lesson to drummers everywhere.

‘’We’ve done four all ready and now we’re steady.’’ From the moment he counts Zeppelin in on Houses Of The Holy’s closing track, Bonzo provides an incessant funk like groove – note how his spacious drum fills allows Page to effortlessly play off the riff. It all leads to a joyous finale – ‘’So good’’ proclaims Plant, surely acknowledging another Bonham masterclass.

Enter the John Bonham Orchestra. Bonzo had long harboured plans for a dramatic solo piece that would incorporate various percussive instruments. In 1976, he achieved that ambition at Mountain Studios in Montreux. With the help of Page’s Evantide Harmoniser effects, an amalgamation of overdubbed bass drums, snare drums, timpani and congas merge with maximum effect. The result appeared two years after his death on 1982’s posthumous Coda collection.

This marathon work-out from Physical Graffiti reaches a zenith around the seven minute mark – that’s the point Bonzo conjures up a barrage of brutal power of the kind other drummers can only dream of. Fittingly, his son Jason did the track justice at Zeppelin’s one-off reunion in 2007.

Aside for the full on attacks of the kit, Bonzo was able to bring a unique economy to his playing. It was often the spaces he left between the beats that gave the songs their vast majestic quality – and none more so than on the epic Kashmir.

The scene at Headley Grange in early 1971: one Ludwig drumkit, one stairwell, one microphone over the banister. The result: the most famous Zeppelin backbeat ever, and one that launched a thousand samples. As Robert Plant remarked: “John always felt his significance was minimal but if you take him off any of our tracks, it loses its potency and sex. I don’t think he really knew how important he was.”

The drum solo for people who don’t like really like drums solos – four and a half minutes of compact brilliance in which Bonham clatters, rattles, shakes and bangs his way into percussive immortality. The original appeared on Led Zeppelin II, but the definitive version was recorded at the Royal Albert Hall in 1970 – as captured on 2003’s Led Zeppelin DVD.