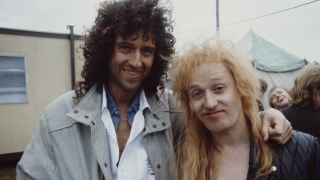 It’s a testament to Queen’s versatility and boundary-breaking success that the artists who have covered them span the most extraordinary range of styles and backgrounds, from Two Ronnies chanteuse Elaine Paige to power-electronic terrorists Bastard Noise.

From somewhere in between those polar extremes, here are 11 of the greatest ever Queen tributes.

This proto-thrash banger from 1974’s Sheer Heart Attack was the first Queen song credited to all four members, although it apparently dates back to Freddie Mercury’s pre-Queen band Wreckage. It was a typically shrewd choice of cover for the Four Horsemen, whose altogether less playful version won Best Metal Performance at the 1991 Grammy Awards.

This magical triptych from Sheer Heart Attack was an inspired choice for the NY prog kings, as Brian May himself attested: “Bloody Hell! Dream Theater seem to be amazing… Beautifully done… Cop that solo in Tenement Funster! Ouch!” gushed Bri on his blog, adding that Roger Taylor called it “The best Queen cover job ever”. Probably safe to say the band took the rest of the week after that.

In 1997, the former-and-future Iron Maiden frontman teamed up with Freddie’s Barcelona duettist for this high-camp BoRhap on the Spanish soprano’s Friends For Life album. Although Bruce isn’t involved in the Galileos, and the rock-out doesn’t rock as hard as it ought, it’s still an extraordinary team-up.

That swaggering riff is a perfect fit for Uncle Ted’s guitar-slinging prowess, and the song’s libidinous lyrics are the perfect fit for Lemmy’s sardonic voice and black humour; he even adjusted a few lines to better fit his rhythm (“I never heard a single civil word, they gave me the bird!”).

The 1977 original is one of Queen’s most avant garde pieces, a stark assertion of sexual desire over a throbbing pile of psychedelic space noise. In 1990, Trent Reznor took this ribald soundscape to the nth degree, revealing Queen as an unheralded cornerstone of industrial electronic body music.

The Scorpions – Love Of My Life

Rearranged for piano, this evergreen ballad from 1975’s Night At The Opera acts as an emotional showcase for the smooth, plaintive tones of Klaus Meine. Although The Scorpions didn’t play the 1992 Freddie Mercury Tribute Concert, Klaus and Rudolf Schenker turned up onstage for the climactic We Are The Champions.

My Chemical Romance & The Used – Under Pressure

Boldly tackling the heavenly one-off jam between Queen and David Bowie – a number one hit in 1981 – MCR and US alt-rockers The Used teamed up for a respectful cover in aid of tsunami relief in 2005.

Between The Buried And Me – Bicycle Race

An odd choice for the tech-death crew’s 2006 covers album, alongside variations on songs by Pantera, Sepultura and Metallica. What’s odder is that having chosen one of Freddie’s most lighthearted and eccentric pop tunes, BTBAM applied themselves to replicating it faithfully, right down to the sound of late 70s bicycle bells.

This brief grindcore Flash-mangling is an admirably insensible highlight from the brilliantly demented 2002 tribute album Dynamite With A Laserbeam: Queen As Heard Through The Meat Grinder Of Three One G, and sounds like Dr Zarkov’s rocket crashing in Hell.

Here’s another take on the Queen classic, this time plucked from the London metal quartet’s 1987 self-titled debut album. This shortened tribute was produced by none other than Brian May which undoubtedly helped Bad News harness the epic feel and scale of the original. A worthy nod to one of the greatest songs ever written, performed with a sense of dignity and grace. Well, almost.

Don't Stop Me: The 10 Best Queen Songs According To Justin Hawkins