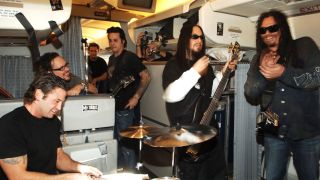 Korn on a plane in November 2005 (Image credit: Theo Wargo\/WireImage)

On June 18, Deftones frontman Chino Moreno performed inside the magma chamber of a volcano.

We’re not joking. Someone had this idea and it’s actually happened. Moreno was be lowered – along with 20 ticket holders – 400 feet deep inside Thrihnukagigur, a dormant volcano near Reykjavík in Iceland.

While playing inside a volcano is the most metal thing to ever happen – that’s yours, Chino, no-one can take that away from you – it got us thinking… what other batshit ideas have bands had when plotting tours of normal brick buildings?

In 2013, the Four Horsemen became the first band to play all seven continents in a year by blasting a killer set to an audience of research scientists and competition winners in a tiny heliport dome. Beforehand, Kirk confessed “It’s pretty wacky. It’s crazy, because I don’t deal with cold very well, so I have my reservations.” Nevertheless, the show went off without a hitch, and the Metallicats never looked cooler. Must’ve been hard to shred in a pair of mittens, though.

KORN ON A PLANE

In 2005, the Bakersfield quintet performed a five-song set at 37,000 feet, onboard a private aeroplane between New York and London, to an audience of competition winners, US soldiers and cabin crew. With no AC power, Jonathan Davis had to sing through the plane’s PA system; before the gig, drummer David Silveria (who left the band soon after) warned “Don’t expect too much, it’s just kinda fucked up in here.” Beats having to listen to that passive-aggressive safety procedure.

THE DEFILED ON AN ICEBERG

In 2014, The Defiled became the first band to play a live set on a free-floating iceberg in Greenland. Cynics might say it was just a publicity stunt for their sponsors Jägermeister, but sadly the event wasn’t enough to prevent The Defiled from splitting up in March, claiming their career was “financially untenable”. Still, a cool thing to do.

MYRKUR AT THE VIGELAND MAUSOLEUM

A cold, dimly-lit, barrel-vaulted tomb in Oslo – entirely ornamented with fresco paintings depicting the journey of life – made a spectral, enchanting concert hall for this unorthodox one-woman black metal enterprise in 2015. With assistance from ex-Satyricon/Ulver guitarist Håvard Jørgensen and the Norwegian Girl’s Choir, band mastermind Amalie Bruun broke hearts with her ethereal ululations on sensitive acoustic reworkings of songs that didn’t need blastbeats and screams to hit their emotional target.

Where better for the Finnish cello collective to premier playback of 2015 album Shadowmaker than “surrounded by dismembered hands, internal organs, conjoined twin skeletons and unusually shaped testicles” (as Hammer’s Luke Morton reported)? New singer Franky Perez was suffering with flu, so two of their introductory four-song acoustic set were instrumental covers, namely their evergreen take on Nothing Else Matters and a spin through Grieg’s Hall Of The Mountain King.

THE CRAMPS AT NAPA STATE HOSPITAL

By a strange, unremembered sequence of events, US psychobilly pioneers The Cramps somehow got to unloose a set of electrifying b-movie punk rock to the inmates of a California psychiatric institution in 1978. Amazingly, the set was filmed, and it’s a fuzzy but gripping spectacle. “Somebody told me you people are crazy, but I’m not so sure about that,” announced Lux Interior. “You seem to be all right to me.”

In 2011, Singapore’s finest purveyors of grinding ferocity came off a six-week US tour, straight into an additional string of Malaysian dates. One of these shows took place inside the ancient natural Kepura Cave, located in the side of a mountain in the Lost World Of Tambun theme park. Grindcore among the stalactites sounds like fun, but a nearby attraction called Sinister Cavern Of Fear sounds even more appropriate.

SEX PISTOLS ON A THAMES BARGE

In one of the all-time great provocative PR stunts, Pistols manager Malcolm McLaren booked the band to play on a barge up the Thames to mark the Queen’s Silver Jubilee in 1977. Launching into Anarchy In The UK as they sailed past the Houses Of Parliament was a step too far for the old bill, who not only broke up the party, but by all accounts gave McLaren a thoroughly unethical pasting.

RAGE AGAINST THE MACHINE ON WALL STREET

RATM were occupying Wall Street a decade before it was fashionable, plonking their gear on the steps of Federal Hall to film a performance of Sleep Now In The Fire for a Michael Moore-directed video in 2000 – without proper permits. In the ensuing chaos, the NY Stock Exchange closed early, prompting Moore to boast “for a few minutes, Rage Against The Machine were able to shut down American capitalism.”

In 1986, Blixa Bargeld’s industrial pioneers were granted “an exceptional permit to perform” in the Golden Hall at Hitler’s former Nazi rally grounds; one news report commented that the band “played the role of exorcists” at the event. Neubauten have a special impulse for performing in unorthodox places, such as a half-built motorway flyover, a skull-shaped rock in the Mojave Desert, and East Germany’s parliament building prior to its demolition.