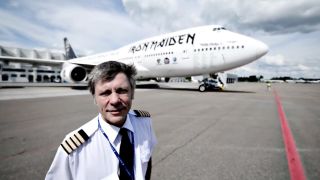 Dickinson and Ed Force One

The vocalist and pilot flew the customised plane around the world on the band’s The Book Of Souls world tour.

But Dickinson has revealed that his flight to Gothenburg for tonight’s show in the Swedish city would be his last – even though their mammoth trek still has 20 shows remaining.

Before the flight, Dickinson says: “This is my last flight on Ed Force One. Myself and Steve are going down to Gothenburg and when she gets there, she’s going to go back with the Icelandic flight crew onboard to Iceland.

“But she’s got one more mission – appropriately enough, it’s gonna go down to see a football match. They’re going to fly 350 people from Iceland down to Marseille to go and see a bit of what might be giant killing – Iceland v Hungary on Saturday.”

Dickinson says it feels “weird” saying goodbye to Ed Force One, and adds: “I’ll miss the big bird but you know what? The show must go on.”

After Maiden’s headline set at Download last weekend, bassist Steve Harris said he thought Dickinson was singing “better than ever.” The Book Of Souls won Best Album at the Metal Hammer Golden Gods earlier this week.