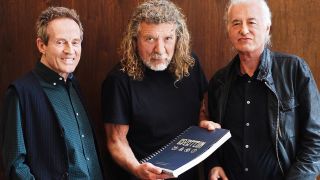 A reunited Led Zeppelin and Fleetwood Mac have been named as the frontrunners to headline Glastonbury 2019.

Bookmaker’s Betway say that Led Zeppelin are “clear favourites” to top the bill on the Pyramid Stage next year at 2/1, while Fleetwood Mac are currently sitting at 3/1.

Betway’s Alan Alger says: “Emily Eavis has previously spoken about her dream of getting Led Zeppelin to headline Glastonbury, and this year the odds suggest there’s a good chance of that becoming a reality at 2/1.

“Fallow years are always hot for stirring headline rumours and over the last few months punters have begun to latch onto the likes of Fleetwood Mac at 3/1, as well as The Beach Boys and The Stone Roses at 4/1.”

There’s been a flurry of activity surrounding the surviving members of Led Zep this year, with the band celebrating their 50th anniversary.

How The West Was Won was reissued back in March, while a 7-inch yellow vinyl featuring the Sunset Sound Mix of Rock And Roll and the Olympic Studio Mix of Friends was introduced to mark Record Store Day in April.

September 7 sees a reissue of The Song Remains The Same, while an official 50th anniversary photo book will be released in October by Real Art Press.

Robert Plant, Jimmy Page and John Paul Jones last played together at the Ahmet Ertegun Tribute Concert in London in 2007 with Jason Bonham taking his late father John’s place behind the drum kit, but Plant has consistently distanced himself from further reunions in the past.

His latest comments came in October last year, when he told the Daily Telegraph: “You can’t ever really go back. It’s tough enough repeating yourself with something that’s a year old, never mind 49 years old. I’ve got to keep moving.”

They’ll head out on a North American tour later this year, with dates planned into April 2019.

Here’s a list of Betway’s top 10 odds on who could headline Glastonbury next year: