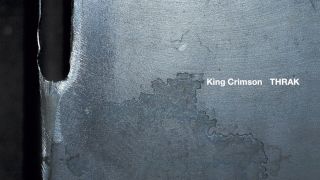 Thrak: The Complete Scores will be published on high quality paper in a 9” x 12” format and spiral bound for open reading on September 24.

A statement on the book reads: “For the first time ever, full band transcriptions of this classic from the King Crimson double-trio era. Six musicians: two guitar players, two bassists and two drummers.

The transcriptions are by Gabriel Riccio, while the editing and tabs were compiled by Gunn, who says: “The approach Gabriel and I have taken with these Thrak recordings was to adhere strictly to what is on this record.

“While we’ve referred to the 2015 re-mixes and various live versions of the pieces, we have generally stayed with notating what is in the 1995 original mixes and performances.”

He adds: “These particular recordings, made at Peter Gabriel’s Real World Studios in the UK, were live performances. In my memory, we played each piece as a group once or twice through, picked a take and then quickly added overdubs accordingly.

“In most cases the overdubbing was very minimal. The record was largely completed in two weeks time, including all of the vocals.”

Thrak: The Complete Scores is now available for pre-order.