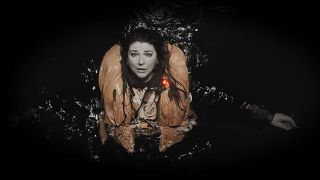 Kate Bush has released a video for her live track And Dream Of Sheep.

It’s taken from upcoming three-disc set Before The Dawn, recorded during her sold-out 22-date residency at London’s Hammersmith Apollo – her first full-scale shows since 1979.

A statement reports: “This is a special piece of film to accompany the release of the live single And Dream Of Sheep. The vocal was performed live while filming Kate lying in the huge water tank at Pinewood Studios.

“This was to create a sense of realism, as the character in the song is lost at sea – however, it became more realistic than Kate had imagined. She spent so long in the water during the first day of filming that she contracted mild hypothermia. She recovered after a day off and carried on filming.

“This film was then projected onto a large oval screen which hung above the stage during the performances of her live show.”

Bush recently said of her live comeback: “I was really nervous every night as a performer. The most difficult thing was to be continually in the now, because I naturally tend to race ahead in my mind.

And Dream Of Sheep is on sale now. Before The Dawn is released on November 25 (December 2 in North America).

Kate Bush: The Heart Of A Lion

Kate Bush Before The Dawn tracklist