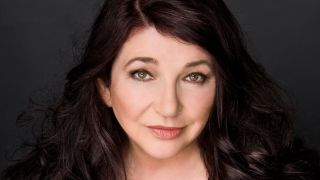 Kate Bush has spoken for the first time about her 2014 comeback shows and says she was “terrified” at the prospect of performing live again.

Her run of 22 nights at London’s Hammersmith’s Apollo were Bush’s first full live performances since 1979.

And she says she was particularly nervous about forgetting her lines midway through a song.

“I was really nervous every night as a performer, but had complete faith in everybody on the stage, everybody in the team, all the sound guys.

“The most difficult thing for me was to be continually in the now because I naturally tend to race ahead in my mind. I think maybe it’s that kind of primeval thing where you’re trying to think, ‘Can I get to that tree before the tiger gets me? Will I be able to get up high enough?’”

She continues: “So my head is always moving ahead just trying to get to the conclusion of whatever this journey is. And once we started running the show I had to be absolutely in that moment.

Asked whether she plans to release any new music to follow-up 2011 albums Director’s Cut and 50 Words For Snow, Bush appeared not to rule it out.

She said: “I haven’t written a song for ages. I haven’t been writing. I’ve been quite busy. I’ve been putting a live album together.”

Asked if she was putting a full stop on writing new music, she adds: “Oh no, I don’t think so. I think it’s just a rather big comma.”

The 2014 shows are the subject of upcoming live album Before The Dawn, which will be released on November 25 via Fish People and distributed through Rhino Records.