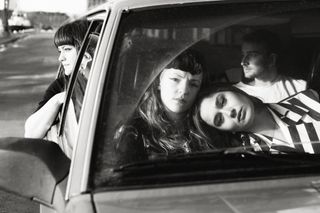 Swedish post-rockers Junodef have released a video for their new single Gold, exclusively with Louder.

The video accompanies the latest track taken from the quartet's 2017 debut album Ocean, stars Swedish actress Amalia Holm Bjelke (Alena, The Hidden Child), and was made by an entirely female production cast.

On the video, the band told Louder: "The music and film industries are largely dominated by men, and this is not because women are lacking skill, talent or willpower, but because traditions and structures are not allowing women the same space as their male colleagues.

"Working with an all-female team for this project is our way of pointing this problem out, as well as finding an alternative way of working. Since we started working with music, the majority of people we have been introduced to – everything from sound-engineers to promoters – have been mainly men. It gets boring after a while."

Gold will be officially released on 27 April, but you can watch the video in full below.