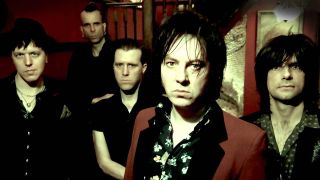 Jim Jones and the Righteous Mind have released a video for Something’s Gonna Get It’s Hands On You. The track is taken from the band’s debut album Super Natural, which was voted the 12th best album of 2017 by Classic Rock.

“Our new video is Little Red Riding Hood and The Wolf in a head on collision crash with The Wizard Of Oz,” says Jones. “Is it a threat or a desire? Either way, it’s out there, and it’s coming for you!”

Something’s Gonna Get It’s Hands On You is built on a riff that sounds like it was ripped straight from the sessions for the first Stooges album, and builds steadily via a series of exultant garage-gospel ‘whoas’ and an even more exultant chorus before eventually exploding into a dizzying tornado of guitar feedback and abuse.

Super Natural was released in May, and was described by Classic Rock as “an anathema to the anodyne mewling of mainstream pop tastes” and “a funeral pyre of rare intensity.”

“I wanted something raw, but exotic at the same time,” says Jones. “Spiritual, but blood and guts earthy too… Super Natural. It’s a tricky balance, but this band really has the chops to make it work.”