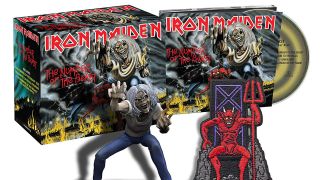 Iron Maiden have announced that they’ll revisit all 16 of their studio albums in a new CD series.

Titled The Studio Collection Remastered, they follow on from the band’s 2014-2017 vinyl releases, with the CDs featuring the same remasters as the 2015 hi-res digital albums.

The albums will launch in chronological order in batches of four over the course of the next nine months, and will start on November 16 with the release of Iron Maiden, Killers, The Number Of The Beast and Piece Of Mind.

Once CD from each batch will also be optionally available in a specially designed box which will include a 1:24 scale figure of Maiden mascot Eddie and a patch.

Maiden bassist Steve Harris says: "We’ve wanted to revisit these for a long time and I was delighted with the remastering we did in 2015.

“I thought it was the best that our albums have ever sounded and it was only right that we made them available on CD now too.”

The first batch is now available for pre-order from Amazon - find a full list of releases below.

Iron Maiden - The Studio Collection Remastered
The first of four planned releases will be available from November, with the next three box sets arriving over the space of the next nine months. Order part one now!View Deal