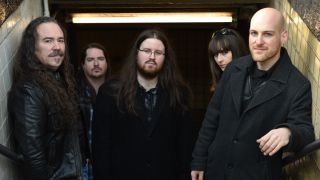 Infinite Spectrum have made their track Federal Hill available to stream exclusively with Prog.

It’s taken from the New York band’s upcoming second album Haunter Of The Dark, released on June 24 via Sensory Records.

The album is based around a concept inspired by a short story by horror writer HP Lovecraft. Lovecraft’s story The Haunter Of The Dark was published in 1936.

On the track Federal Hill, Infinite Spectrum say: “It’s a theatrical opening song for the album. We wanted to start things a bit softer and give a sense of character to our narrator through his artistic endeavours and occult interests before the story heads down the dark rabbit hole that Lovecraft devised.

“Like Lovecraft’s story, our recording is told from a single point of view, that of protagonist Robert Harrison Blake. The track is really the calm before the storm and captures his sense of curiosity.

“When we talked about the production of Federal Hill, we wanted to keep things fairly open in terms of sonic space. We bring in some retro instrumentation as a nod to some of our favourite classic prog groups.”

They continue: “There’s a mellotron line in there along with some vintage synth sounds and a few sections that have a more arranged feel, which develops later in the album. In addition to the softer, moody feel of a few songs like Federal Hill, the album also has plenty of heavy guitar-oriented tracks.”

The band teamed up with Grammy award-winning engineer Chris Theis on the album. Theis co-produced along with Infinite Spectrum’s Will Severin, Alex Raykin, and Alex Repetti.

Infinite Spectrum add: “It has a bigger sound than our previous album and we think it’s a diverse and engaging album that hits hard and sticks with you.

“Musically speaking, there are a lot of influences the different members of the band bring to the table, so we think listeners will find a plenty of variety on the disc.

“Whether you’re a fan of heavier prog metal like Dream Theater or Symphony X or more of a classic prog fan of bands like Pink Floyd, you’ll find something to like.”