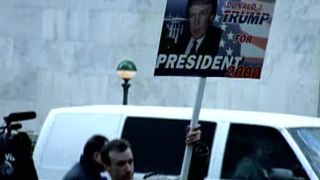 Rage Against The Machine bassist Tim Commerford recalls how the band ‘predicted’ Donald Trump would one day be US President.

In the promo video for Rage Against The Machine’s 1999 single Sleep Now In The Fire, a man can be seen holding up a placard which reads “Donald J Trump for President 2000.”

While the prediction may have been 16 years too early, Commerford says it was a comment on the world as it was in 1999 and that he can’t quite believe it has come true in 2016.

Filmmaker Michael Moore directed the video and Commerford gives the credit for the prediction to him.

Commerford tells Metal Hammer: “That was more of Michael Moore’s idea, we could take credit for but that was a video we did with Michael Moore, and maybe he had a vision.

“But I don’t think any of us took it very seriously when we did it, we just thought about the world we live in. This was before Donald Trump went bankrupt and before he started doing reality TV shows, which ultimately, it’s that reality TV show mentality world that we live in right now that has put him in office, so to speak.”

Commerford says Prophets Of Rage met with Moore during the campaign for the Presidency this year and that Moore warned them not to be surprised if Trump defeated Democrat Hillary Clinton.

He adds: “I didn’t expect this. Oddly enough, when we played in Detroit, Michael Moore came out to the Prophets Of Rage show in Detroit and we were talking to him obviously about this whole thing.

“He was saying ‘Hey, man, I’m not convinced that the guy won’t get elected’. Michael Moore was more concerned than I was, I was sort of believing the hype that there’s no way this guy could get elected and Michael Moore was like ‘Don’t believe the hype, man, it’s totally possible and there’s a different demographic that’s going to show up to the vote, to vote for this guy.’

“And he was right. And here we are, and it’s scary times. It’s scary times for the world – we live on the planet earth, we’re all here together really, those days of having to jump into a ship and float over the ocean to get to one side of the world – those days are over.

“We’re all living on this planet, we’re all together, and we’re all screwed right now.”

Commerford has also written a reaction piece to Trump’s victory. Read it here.