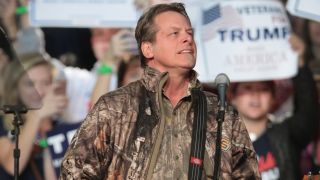 Ted Nugent has hailed American citizens after Donald Trump’s victory in the US Presidential election, saying they had “defied the establishment.”

Nugent – who performed at a Trump rally in Michigan during the campaign – is one of the few figures from the world of rock to celebrate Trump’s win over Hillary Clinton, with most others expressing their disappointment and their fears for the future of the USA.

An outspoken Republican who has caused outrage over his views on hunting in the past, Nugent says America showed “balls” in electing Trump.

In a video posted on his Facebook page, an emotional Nugent says: “I’m getting up to go deer hunting this morning because I’m a free man. We defied the status quo, we defied the establishment. God bless you Donald Trump.

“America still has a soul. Not everybody, but enough of us. We declared our independence, and we told Hillary Clinton we don’t accept liars, scammers, thieves and rotten freedom-hating, constitution-hating, conniving criminals to be President. Thank you America, good going.”

Nugent adds that he will ramp up his outspoken ways after Trump’s win, saying: “God bless America, I’m feeling mighty good. And you know the only thing more dangerous than a sow grizzly bear cornered with cubs? Ted Nugent with more confidence!

“Oh, we’re in deep shit now. You thought I was hard-hitting before?”

The singer and guitarist then goes on to describe himself as a “dog in heat” before adding: “All you beautiful ladies out there, just think in terms of scrotum. You gotta let it swing to and fro and bash down tall buildings. The scrotum is all about tenacity.”